When you mix two women-hungry men with a family of nut cases, you get the 2005 comedy Wedding Crashers.

Two Cads and a Whole Lot of Weddings

Meet John Beckwith (Owen Wilson) and Jeremy Grey (Vince Vaughn). Some guys hang-glide for recreation, some go to the gym, some guys go to singles bars to meet women. Best friends John and Jeremy are wedding crashers. They do it because it's a great place to score with women.

I personally found the premise a bit implausible. It's always been my impression that single men would rather go to the dentist than to a wedding, which is actually more about family and commitment than it is about sex, but that's the premise you'll have to accept to enjoy the movie.

John and Jeremy have a reason to be cynical about marriage. The two men are business partners, divorce mediators in Washington D.C., and the relationships they see are the toxic ones going down in flames. But away from work, they crash weddings, following in the footsteps and tradition of the legendary Chaz Reinhold (an uncredited Will Ferrell, met late in the movie).

The Lives of the Party

If it weren't for their caddish practice of seducing women under phony identities, anyone would want John and Jeremy at their wedding, because they really make a party go. They dance with the flower girls and old ladies, make balloon animals for the kids, and make sure the champagne flows freely, and everyone has a wonderful time.

They have new names and new stories for every wedding and are equally comfortable in Jewish, Catholic, Protestant, and Chinese weddings. For the period of wedding season, they have a blast. And score they do.

The Wedding of the Season

The wedding season is winding down, and John is frankly exhausted. They aren't as young as they used to be. But Jeremy encourages John to attend one last wedding this season, because it's a biggie. The daughter of fabulously wealthy Secretary of the Treasury Cleary (Christopher Walken) is getting married, and it will be a huge do, fabulous food among the rich and powerful, and lots of lovely women to choose from. 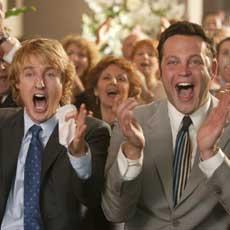 So wedding crashers reluctantly crash one last wedding. At the wedding, each man calls dibs on a bridesmaid. And they're both Cleary daughters. Jeremy has his eye on the feisty-looking young redhead Gloria (Isla Fisher), while John is struck by the maid of honor Claire (Rachel McAdams).

That Claire is just the woman for John is made clear when she has trouble keeping from laughing at the happy couple's sappy self-written marriage vows. But at the wedding reception, an obstacle appears; Claire's nasty upper-crust boyfriend Sack Lodge (Bradley Cooper).

Jeremy seems to be having better luck with Gloria, but after sex on the beach, she declares herself a just deflowered virgin and deeply in love. Jeremy is ready to make a hasty exit, but John needs more time. No longer willing to move on to an easier conquest, he wants to spend more time with Claire.

Meanwhile, Gloria has twisted her daddy's arm, and the two friends are invited to a family weekend house party.

This Family Is Nuts

So the wedding crashers are off, up the river on a large private yacht to the family estate, for touch football and family dinners and quail hunting and bike riding.

On their home turf, the Cleary family is revealed as a complete fruit basket. Their sports could get a guy killed. Sweet little granny (Ellen Albertini Dow) turns into a vulgarian potty-mouth when the subject of Eleanor Roosevelt comes up. Mrs. Cleary (Jane Seymour), frustrated and drinking too much, puts the moves on John. John is falling in love with Claire. And Jeremy just tries to stay alive. Sweet, innocent Gloria ties him to the bed, and weird brother Todd (Kier O'Donnell) has designs on him as well.

The Truth Comes Out

Eventually, as might be expected, John and Jeremy are exposed as imposters and shown the door. But another truth is revealed - Gloria admits to Jeremy that she lied about being a virgin. Having run away from her for days, suddenly he finds her irresistible.

Back home, Jeremy begins a secret fling with Gloria, while John, in love and rejected, goes to pieces, breaking off from Jeremy completely. Claire, confused and unhappy, agrees to marry Sack.

Something's got to give. And it does, when John crashes his best friend's wedding.

For Parents: Wedding Crashers was not rated by the MPAA, but think about it - partial nudity, sexual situations, infidelity, and bondage? Not for kids.