War movies have been made almost as long as movies themselves have, with D.W. Griffith's The Birth of a Nation - a bizarre and rather racist depiction of the civil war - being the first film ever made that ran over one hundred minutes in length. As such, war movies have a rich place in Hollywood's history and have been made for purposes of entertainment, propaganda, and education. However you feel about the topic of armed conflict and war in general, there is bound to be a war movie to suit your individual tastes. Like films of any genre, there are "good" and "bad" war movies. While this can largely be a matter of taste, we will attempt to cover a few films here that are considered to be some of the best war movies ever made.

From Here to Eternity

No collection of war films could ever be complete without From Here to Eternity. This classic tale of soldiers in Hawaii on the night before the Japanese attack on Pearl Harbor. With a cast that includes Burt Lancaster, Montgomery Clift, and Frank Sinatra, how could one go wrong? This 1953 effort goes a long way toward revealing what life in the military was like as the United States was ushered into World War II. Not as gritty or realistic as films to come later, but undeniably a classic.

George C. Scott plays General George S. Patton with an amazing and Oscar-worthy characterization in the war movie Patton. Scott actually won the Best Actor Oscar for this film, but refused to accept it. He said that such competition between actors was unfair and that the Academy Awards was a "meat parade". Regardless how he felt about the accolades, it is hard to deny that his performance was anything short of brilliant, and Patton itself is a testament to not only one of America's most provocative military minds, but to those who served him in Europe during WWII.

If you're looking for gritty realism in a war film, Apocalypse Now may not be your cup of tea. When it was released in 1979, Vietnam War movies were still something of a Hollywood taboo as few had been made, and none really depicted the realities of that war. Director Coppola's stroke of genius was in making a film of Joseph Conrad's Heart of Darkness and setting it against the backdrop of Vietnam. Captain Ben Willard's (Martin Sheen) bizarre journey up river to confront the even more bizarre Col. Kurtz (Marlon Brando) makes for a movie that simply must be seen. From the helicopters blasting Wagner's Flight of the Valkryies as they flew in to attack to Robert Duvall's classic "I love the smell of Napalm in the morning" speech, this is a must see film. 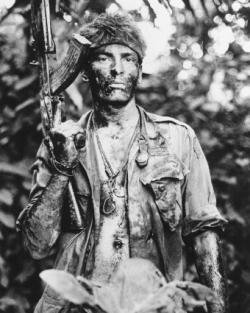 A lot stronger on the realism but a bit slanted to the left politically for some, Oliver Stone's Platoon became the definitive Vietnam War movie of the 1980's. Seen through the eyes of green recruit Chris Taylor (Charlie Sheen), the Vietnam War is depicted as an event which ultimately changed everyone involved in it profoundly. We see the Vietnam soldier as a liar, a coward, and a murderer (something that Vietnam Veterans' associations had an obvious problem with), but ultimately as the victims of an unjust war. In the end, that is the message Stone was trying to send.

Possibly one of the most realistic films about the Second World War ever made, Saving Private Ryan is based on perhaps the most unrealistic premise. A family has four sons serving in the war and two of them fall during the invasion of Normandy while a third is killed fighting the Japanese. To prevent this family's loss of all four sons, the top Brass dictate that a mission will be undertaken to locate and "save" the fourth Ryan brother (Matt Damon). Despite the unlikelihood of the government's or military leadership's caring whether all four Ryan brothers perish in war, the opening scenes of the invasion of Normandy alone make this a movie worth watching. The battles and encounters that the small band of soldiers and their captain (Tom Hanks) experience while attempting to save Private Ryan serve to remind us that soldiers in all wars face incredible hardship. Despite its unlikely premise, it is a beautiful film.