Although set in a dark period of world history, The Sound of Music is a joyful musical journey.

At a convent high in the Austrian Alps, the nuns have a problem, and the problem is a postulant named Maria. Maria (Julie Andrews) is not a bad person by any means, she's just not nun material. With an excess of exuberance, Maria can't settle down to her chores when she'd rather be outdoors singing.

Mother Abbess (Peggy Wood) decides to send Maria outside the convent to determine if convent life is really right for her. So the naive convent girl is sent off to be a governess.

Couldn't they have started Maria off in governessing with an assignment a bit less challenging? But no, she finds herself in charge of no less than seven children, whose gloomy widower father Captain Von Trapp (Christopher Plummer) is entirely ignorant about child rearing and so has tried to 'command' his family like a ship's crew. He even summons them with a bosun's whistle!

As might be expected with the children of a domestic tyrant, the von Trapp children come to attention in their father's presence, and are governess-terrorizing brats when out of his sight.

Maria, however, quickly wins them over. How? By singing.

Maria teaches her charges to sing, something they excel at, and also how to play. She makes them play clothes, something these poor little rich kids never had before. 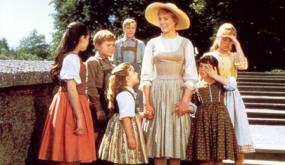 Even the icy Captain is beginning to warm up to Maria. But there are complications. Maria still believes that God expects her to become a nun, and the Captain has just become engaged to the Baroness (Eleanor Parker), a woman more suited to his former rigid and cheerless self than to the man he is becoming under Maria's influence. The Baroness has her own prescription for handling the children of a first marriage - "boarding school."

And then there are the Nazis.

A Continent on the Brink of War

While Maria is bringing sunshine to the lives of the von Trapp children and their slowly thawing father, the rest of the continent is not so lucky. The Sound of Music is set in the 1930s, and Austria is on the brink of joining Hitler's Third Reich.

Once Maria and the Captain finally acknowledge their love and get married, the now-famous Von Trapp Family Singers still have to escape from Nazi Austria.

The Sound of Music was a hit Broadway musical before it was made into a movie in 1965, and the songs have become standards. Most people would recognize many of the songs, even if they've never seen the movie. "The Sound of Music," "Edelweiss," "Sixteen Going On Seventeen," "Climb Ev'ry Mountain," and "My Favorite Things" ("Raindrops on roses and whiskers on kittens...") all originated in The Sound of Music.

The Sound of Music Credits and Awards

Comments
© 2006-2021 LoveToKnow, Corp., except where otherwise noted. All Rights Reserved.
The Sound of Music