Stanley's Kubrick's The Shining is even more impressive now than it was twenty-five years ago. Now it can be taken at face value. Stanley Kubrick's films cover an amazing scope when his body of work is considered all together. Whether it's the religious ramifications of 2001: A Space Odyssey or the day after tomorrow bizarre world of A Clockwork Orange, it is nearly impossible to pigeonhole Kubrick's work into any single genre or style.

When the film first came out it was panned by many critics and many moviegoers due to the differences between it and the Stephen King novel on which it is based. King may have provided the original story, but the movie is pure Kubrick. Although it is really the only horror movie the famed director ever made, the film resonates with his unmistakable touch from the first frame to the last. Kubrick took King's work and molded it, shaped it, made it his own in such a way that, in the hands of any other director, it would not have had the impact that it does now. A large number of movies have been made from King's books and stories, but only a scant few of them can be considered truly "good" cinema. Rob Reiner's versions of Misery and Stand by Me are definitely among them as is The Green Mile, but this sits atop the heap as the film that best conveys the moods of terror and isolation. 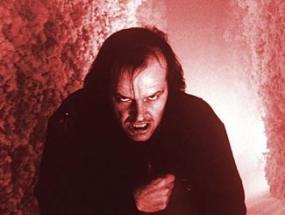 The Shining tells the story of a family coming to stay at an isolated Colorado hotel during its off season to act as caretakers. The family has been dealing with its own issues as the father, Jack Torrence (Jack Nicholson) has a history of alcoholism and borderline abusive behavior. The family's young son possesses a gift of psychic abilities - a gift which his parents are not aware of. The Overlook Hotel, however, is home to a power or an intelligence that is not of this realm. Call it haunted or a place of psychic energies, or whatever you like, but it is very aware of young Danny Torrence's (Danny Lloyd) abilities and wants them for its own. Over the course of the film we learn that the hotel is usually adept at getting what it wants. The last caretaker, a relatively sane man named Grady, went insane while at the Overlook and took his own life - but not before he murdered his wife and twin girls with an axe.

Kubrick's filmmaking mastery is evident in every scene of The Shining. Through the use of wide shots and echoing sound we can feel the emptiness of the vast Overlook Hotel and the isolation that the Torrence family is clearly feeling. In fact the only scenes that don't seem to take place in an enormous and open location are the few in the beginning of the film which depict the Torrence family's apartment and the few in the family's hotel living space. These, by contrast, feel claustrophobic and suffocating.

Memorable Scenes from The Shining

Like many of Kubrick's films, The Shining is stuffed full of memorable scenes and dialogue. Nicholson's performance, as usual, is Oscar worthy, and his wild eyes and unkempt hair convey the look and feel of an absolute madman. When he catches his wife Wendy (Shelly Duvall) reading the "novel" he's been working on while at the Overlook (pages and pages of the phrase "All work and no play make Jack a dull boy") we the audience realize that he's finally snapped for good and the best (or worst for Wendy and Danny) is yet to come.

One other scene that can never be forgotten and has been known to cause nightmares occurs when Jack goes to a supposedly empty room in the hotel to investigate his son's claims of being attacked by a crazy woman there. Jack enters and is led, apparently by instinct, to the bathroom where he sees a beautiful, nude woman emerging from the shower. In a dreamy sequence he goes to her and locks in an embrace and kiss only to have her transform into the bloated corpse of a long dead elderly hotel guest. If you've seen it, you will remember it forever.

Horror movies come and go and it is a genre in which so few truly good movies are made. A film like The Shining comes along practically once in a lifetime. Fans looking for a play by play conversion of King's novel must look to the poor 1995 TV miniseries version. People looking for a great movie need only look to Stanley Kubrick.