In true horror movie fashion, The Mummy Returns, released in 2001, proves that just because the villain was killed in the previous movie, that doesn't mean he can't come back in the sequel to wreak havoc once again. At the end of 1999's The Mummy, Adventurer Rick O'Connell (Brendan Fraser) and Egyptologist-Librarian Evelyn Carnahan (Rachel Weisz) had defeated Imhotep (Arnold Vosloo), the evil mummy-magician reborn from ancient Egypt.

We rejoin the couple in 1933, ten years after the events of The Mummy. Rick and Evie are married now, and raising their smart-as-a-whip handful of a son Alex (Freddie Boath). Evie's brother Jonathan (John Hannah) is just as much of a silly wastrel as he ever was. 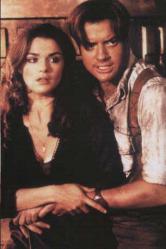 Evie is having dreams (visions? memories?) about Ancient Egypt. The accuracy of her dreams is made clear when they lead her right to the fabled Bracelet of Anubis.

A nice thing to have, right? Oh, they don't know what they've got.

Meanwhile, a chanting cult in the British Museum, directed by a mystery woman Meela (Patricia Velasquez), perform an arcane ritual to raise Imhotep from the dead. As in The Mummy, Imhotep returns as a gruesome walking corpse. He has a lot of killing to do before he looks human again.

The cultist henchmen of Imhotep invade the O'Connells' gorgeous London home. They are looking for the Bracelet of Anubis. In the melee, Alex puts on the bracelet, which becomes immovably attached to his arm. The henchmen kidnap Alex and escape. (Though "they escape" doesn't do justice to a fabulous chase scene.)

What is Imhotep After?

Fortunately, the O'Connells' old friend Ardeth Bey (Oded Fehr) has come to London, and he clues them in on what's going on. Imhotep is searching for the tomb of the Scorpion King. Whoever can defeat the Scorpion King will command the immortal and unstoppable Army of Anubis. Yep, it's that old conquer the world thing again.

The bracelet leads the wearer to the tomb of the Scorpion King in his gold pyramid in the Egyptian desert. Once on, the bracelet can't be removed until it reaches the pyramid, so Imhotep needs Alex to lead him to the pyramid.

Of course, Rick and Evie aren't about to let that happen. Especially not with their son in the mix. So they set off for Egypt to stop Imhotep and rescue their son.

As for Alex, his captivity in Imhotep's clutches reminds one of the short story comedy "The Ransom Of Red Chief". Imhotep can't kill him; he's the wearer of the bracelet. But Alex sure makes him wish he could. The boy is O'Connell through and through, and his mother's son as well.

In this entry in the Mummy series, the chase is a good part of the fun, double-decker buses in London, 1930s trains, and a delightfully quirky dirigible. The gold pyramid of the Scorpion King is worth the wait, sitting in its jungle setting, guarded by a host of pygmy mummies. (Yes, pygmy mummies. The special effects guys must have had a blast working on this movie.)

Like its predecessor, The Mummy Returns unfolds at breakneck speed, with dazzling special effects and plenty of humor to leaven the danger and derring-do. The battle in the end is spectacular, and as a bonus we learn what Evie had been up to in a previous life.

Walking corpses? Not for younger children. Teens and adults will not be disturbed unless they're unusually squeamish.

The Mummy Returns was directed and scripted by Stephen Sommers.