In The Incredibles, will the Parr family survive the unique stresses that threaten to destroy their family's unity and harmony, or will the destruction of their family and their way of life come from outside their home? Just who is the person who's trying to kill them all ... and why is he determined to annihilate them? Learn this and more in The Incredibles, which is destined to become a family movies classic.

Bob Parr (Craig T. Nelson) is unhappy. Stuck in a dead-end job at an insurance company where he's required to nicely thwart the claims of the people he's ostensibly helping, Bob just can't seem to settle into the role he's expected to play. His wife Helen (Holly Hunter) tries to help him live a normal life, but Bob and his family aren't "normal" -- they're superheroes who are not allowed to exercise their super-human powers by a society that has decided that the problems engendered by "supers" are worse than the problems the supers solve. Forced to suppress their super abilities, Bob and his kids are frustrated, and his wife is rapidly coming unglued from the strain of trying to hold them all together.

A top-secret organization offers Bob a job that will allow him to use his super powers. As he's just lost the dead-end job, Bob accepts and begins a double life of which Helen knows nothing. But Helen does notice the changes in her husband. The upbeat attitude that has replaced his former sullenness. The fancy new sportscar. The frequent overnight business trips. And the new repair on Bob's old superhero suit.

Knowing that there's only one person Bob would allow to repair his suit, Helen calls their friend Edna (Brad Bird), who insists that Helen pay her a visit. It is while she is with Edna that Helen discovers the truth about Bob's secret life. When she activates a tracking device in the new suit that Edna has made for Bob, Helen has no idea of the trouble she's landed her husband in. But she's about to find out.

All the Parrs in Trouble 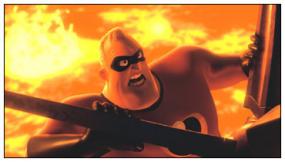 Helen is an accomplished pilot and charters a plane to get to the island where Bob is on his most recent "business trip." What Helen doesn't know is that the kids, Dash (Spencer Fox) and Violet (Sarah Vowell) have stowed away on the plane, leaving their baby brother Jack-Jack in the care of Violet's friend Kari (Brett Parker). Bob is incarcerated by his new employer, who is actually a man with a grudge. Bob, as Mr. Incredible, shunned Buddy's help when Buddy was a kid, and now Buddy has has assumed the identity of "Syndrome" and has devoted his life to payback. So he doesn't balk at blowing up the plane with Bob's wife and kids on it -- while Bob is listening. But Helen (who was Elastigirl when she was a practicing super) saves herself and the kids and gets them to the island where their dad is a prisoner.

Helen and the kids try to rescue Bob, but succeed only in getting trapped by Syndrome. And then they discover his awful plot. Finally, the family begins to work together to stop Syndrome from taking over. With a little help from Syndrome's disillusioned assistant Mirage (Elizabeth Pena), they escape the island and return to Metroville, which Syndrome is now terrorizing with his Omnibot -- a weapon that only he can control. Joined in their fight to save the city by their super friend Frozone (Samuel L. Jackson), the Incredibles battle the Omnibot and save the city, only to find that Syndrome has escaped.

The End of Syndrome and the End of the Parrs' Troubles

It is while Helen is checking her voice-mail and listening to increasingly hysterical messages from the babysitting Kari that the Incredibles realize where Syndrome has gone ... and they race to rescue Jack-Jack. The final defeat of Syndrome and the after-effects of the Incredibles saving the city finally resolve the Parrs' problems, and they find that they can finally set their incredible abilities free.