The Great Race is one of the greatest comedy family movies ever made. It's twenty thousand miles of hilarious fun, adventure, and furious competition as Professor Fate and The Great Leslie race to see whose car can make the drive from New York to Paris in the shortest time - while a wildcat suffragette inveigles her way into the race, so she can further her cause of emancipating women from drudgery and subservience.

It's the 1920s, and automobiles are coming into their own. So are stuntmen like The Great Leslie (Tony Curtis), who, with the assistance of his faithful retainer Hezekiah (Keenan Wynn), performs various exhibitions to entertain and educate the public. He has himself strapped into a straitjacket, suspended from a hot air balloon, and launched into the air, so he can escape and parachute to safety. He tries to set new speed records on land and sea. And his perfectly white suit always stays perfectly white.

Everything that the Great Leslie is, Professor Fate (Jack Lemmon) is not. An aspiring stuntman himself, Fate finds that his exhibitions always fall apart, and his schemes to sabotage Leslie always end up with him as the victim. Even his assistant, Max (Peter Falk), is inferior to Leslie's Assistant. Fate is, therefore, profoundly jealous of Leslie.

The Great Race Is Conceived

Leslie wants to try something new, and he wants to prove that the American automobile is the best in the world, so he proposes a race from New York to Paris. Anyone who wants to enter is welcome to do so, and both Leslie and Fate have cars prepared to very exact specifications.

Maggie DuBois (Natalie Wood) is a woman with a mission. Determined to further the cause of equal rights for women, she invades the offices of The New York Sentinel and badgers the editor-in-chief into sponsoring her as the driver of a car in the race, so that she can report the race as it happens.

All of the cars are ready, and the race is on. Thanks to Max and Professor Fate, cars begin to fall apart within the first mile. Unfortunately for the Professor, Max did such a thorough job that he even sabotaged their car, so that both The Great Leslie and the determined suffragette pass them. But Maggie's car breaks down in the desert...the Stanley Steamer chosen by her boss is simply not an appropriate car for such a long journey. And now begins Maggie's real fight: the fight to stay in The Great Race, no matter what it takes. 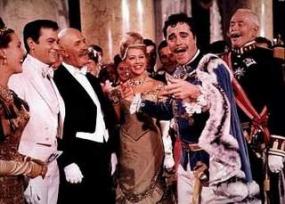 The Great Leslie and Hezekiah stop to help Maggie and agree to take her to the next stop, a town called Boracho. Fate and Max have arrived ahead of them, and they contrive, while Leslie is occupied with the town's welcoming celebration, to steal the petrol they need and blow up the rest. Maggie stows away in Fate's car, but he abandons her in the desert. When Leslie comes back through the desert on the way to a former stop, to telegraph for more petrol to be shipped, he rescues Maggie, with the intention simply of getting her to a place where she can get a train back to New York. He hasn't counted on her determination. She tricks Hezekiah and usurps his place at Leslie's side.

The next great hurdle is to get across the Bering Strait and into Asia. Coincidentally, Leslie and Fate find themselves marooned on the same fragment of iceberg, and it's only sheer luck that gets them to land before their fragile island melts. While they are making the passage, it becomes quite clear that Leslie is becoming entranced by the lovely Maggie, and Fate is both disgusted and intrigued. He knows he can use the budding romance to his advantage.

When the iceberg lands them in a Russian port, Leslie finds Hezekiah waiting for him, and Maggies duplicity is revealed. In the midst of the raging argument that ensues, Fate drives by and snatches Maggie into his car. The horrified Leslie pursues Fate, hoping to rescue Maggie. At Tobolsk, Leslie catches up with Fate, but the wily Maggie tries to make him jealous by kissing Fate passionately. Fate is disgusted, but the trick works. Leslie is appalled and confused.

Leslie arrives in Carpania to much acclaim and adulation. He hasn't seen Fate since Tobolsk and assumes that he has left Fate behind. But Fate is already in Carpania, still accompanied by Maggie. While Leslie is being feted in the palace, Fate, Maggie, and Max are enjoying a rest stop on the palace grounds. When they are jailed for trespassing, a curious resemblance between Fate and the prince regent (a brandy-soaked imbecile) is discovered, and a corrupt official tries to substitute Fate for the prince at a coronation, so that he himself can gain control of the country. But the plot is revealed, and Fate flees the country - after one of the greatest pie fights in all film history. (2,357 pies were used!)

At last, they draw near to the finish line. Leslie and Maggie are having a terrific row, because Leslie tried to kiss Maggie, and she slapped him. They are merely inches from the finish line when Leslie abruptly stops the car and intentionally lets Fate pass him, in a last-ditch effort to prove to Maggie that he loves her. Maggie, starry-eyed, says, "You lost!" and he replies, gazing deep into her eyes, "Only the race."

The romantic tension between Leslie and Maggie is masterfully played up throughout The Great Race. The lavish costuming and sumptuous set-work add amazing verisimilitude to the story. And, like so many great comedies, the movie is full of references to the popular movies of the time, spoofing them with incredible, subtle skill. The pie fight, the sword-fight between Leslie and Baron von Stoup, and the sing-along song (complete with bouncing ball) are all pointed mocking the silly conventions of the contemporary films of the day.

No family should miss The Great Race. It has something for everyone, and no one can fail to find its subtle and not-so-subtle humour appealing. There are a few cautions for the more careful families: Throughout the Carpania scenes, Maggie is clothed only in her chemise and corset - her clothes having been left on shore while she bathed in a lake, just prior to being arrested. As part of the underlying tension between Maggie and the editor of the Sentinel, and between Maggie and Leslie, sexual freedom and sex are discussed rather freely, though not with any graphic detail.