The Emperor's New Groove is one of those family movies with a great lesson that is well-packaged and subtly woven into the storyline. Emperor Kuzco has his life set just the way he likes it: it's all about him, and beware if you get in his way. But chief adviser Yzma is not the only person who thinks it's time for the Emperor to get a new groove, and his plan to build a pool in Pacha's village isn't winning him any friends among the common people. Will Kuzco get a new groove, or will he stay self-centered for long enough for Yzma to kill him?

Emperor Kuzco is a swinging, hip cat who wants just one thing: a pool for his birthday. But he's not sure where to put his pool, so he sends for the head of the local village to get his advice. Pacha tells him that one particular hill "sings" when the sun shines on it just right. So Kuzco tells Pacha that his pool is going to be placed on that hill -- problem is, that's the hill on which Pacha's house, and most of the village, is located.

The Emperor's chief adviser, Yzma, wants to kill him. Kuzco doesn't know this, of course, or he would never have fired her. At dinner that night, Yzma tells her boy-toy, Kronk, to poison the Emperor. Unfortunately, Kronk gets the poison bottle mixed up with Yzma's "Essence of Llama," and, instead of killing Kuzco, he's changed into a llama. Yzma tells Kronk to get rid of him, and Kronk bags him and dumps him in the moat ... where he lands, ironically, in the back of Pacha's cart.

The Emperor's New Groove -- As a Llama? 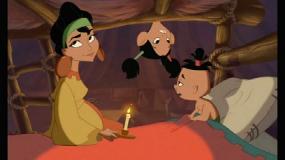 While Yzma is holding a funeral for the emperor and taking over the kingdom, Pacha carries the bagged llama all the way home. After greeting his wife and kids, the worried Pacha goes out to empty the cart and put his llama in the stable. He finds the bag containing Kuzco and, puzzled, opens it. When Kuzco comes out and talks to him, Pacha thinks he's a demon in llama form. Kuzco claims to be the emperor, but Pacha doesn't believe him. He tells the emperor to look at his hands ... and when Kuzco sees hooves, he goes hysterical. He's not pleased about being a llama at all, and he demands that Pacha return him to the palace, so he can get Yzma to change him back to himself. When Pacha refuses unless the emperor agrees to put his pool somewhere else, Kuzco stalks off into the jungle on his own.

Back to the Castle

Knowing that the emperor is in danger in the jungle, Pacha follows him and saves his life. He then agrees to take Kuzco back to the palace, with the hope that he can change the emperor's mind about the pool location while they are on the trail. While they are crossing the bridge that is a short-cut to the palace, Kuzco and Pacha fall through. Only by working together do they manage to stay alive. But the bridge is destroyed, so their trip will now take four days instead of two.

Meanwhile, Kronk has revealed to Yzma that Kuzco isn't exactly dead, and the two of them have set off to find Kuzco and destroy him.

When Kuzco and Pacha stop at Mudka's Meat Hut for a meal on their way back to the palace, Kronk and Yzma come in. Pacha recognizes them and realizes they want the emperor dead. He tries to warn Kuzco, but Kuzco refuses to believe that Yzma would want him dead. In a fit of rage, he leaves Pacha on the trail and returns to Mudka's, just in time to hear Yzma tell Kronk that Kuzco must be eliminated. Kuzco is stunned and runs off to find Pacha. But night overtakes him before he catches up with Pacha. Kuzco spends the night in a pouring rainstorm, miserable and discouraged. The next morning, he goes down to the pasture where the other llamas are eating and tries to feed like they do. It's very unpleasant, and Kuzco is overjoyed when he finds Pacha there in the pasture.

Race to the Palace

Pacha and Kuzco takes off for Pacha's house, to pick up a few things before heading for the palace again. But Yzma is already there, and it takes a herculean effort on the part of Pacha's wife to get them away safely. Yzma sees them running down the pathway, and she and Kronk follow, hard on their heels.

When they arrive at the palace, Kuzco takes Pacha down to Yzma's secret lab, where they begin searching for the potion to restore Kuzco to himself. But somehow Yzma and Kronk have beaten them back to the castle, and Yzma has the potion that is needed. She knocks over the shelf that holds her potions in an effort to confuse them, and they pick up every potion that they can get, to try to change Kuzco back. They and Yzma, and her various minions, are changed into various creatures in a fantastic final battle. Finally, Yzma the Cat and Kuzco the Llama struggle over the right potion, ranging all over the palace, and ending up on the intricately carved facade, where Kuzco ultimately gets the potion and changes back into himself -- Yzma is stuck as a cat.

Kuzco has resumed his former body, but his personality is permanently changed for the better. He moves his planned pool to another location, makes up with those whom he's hurt, and shows that he has learned to put the welfare of his subjects above instant gratification of his own whims. Thanks to the emperor's new groove, life is better for everyone.