The Devil's Rejects is Rob Zombie's sequel to his 2002 shocker House of 1000 Corpses. While Rejects is a sequel in that a number of characters from Corpses return, but it is in many ways a completely different sort of film, one that managed to garner surprising kudos from a number of critics. Even Ebert and Roper gave it their coveted two thumbs up.

The Return of the Firefly Family

While House of 1000 Corpses had a plot that mimicked (read: was stolen from} The Texas Chainsaw Massacre, Rejects goes in an entirely different direction. The police have tracked the missing people from Corpses to the Firefly home and are moving in to arrest the murderous clan. Captain Spaulding (Sid Haig) gets wind of the operation and realizes it is only a matter of time before the law is knocking on his door as well. He skips town and makes arrangements to meet up with Otis (Bill Moseley) and Baby (Sheri Moon Zombie) sometime later.

Meanwhile, the police have besieged the Firefly homestead; result in a horrific shootout that claims the lives of a great number of police officers and results in the capture and arrest of Mother Firefly (Karen Black) herself. Otis and Baby do manage to escape and, for the first time, find themselves running for their lives; hunted and desperate as their victims have been in the past. 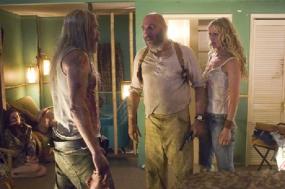 Of course, the Firefly's just wouldn't be the same if they weren't torturing and killing people brutally. In an effort to stay hidden they come to a small, out of the way motel and invade the room of the people staying there (one of whom is played by Three's Company alum Priscilla Barnes). Rather than just threatening the group, Baby and Otis systematically torture and murder all of them before escaping from the police once more.

The bad news for Otis, Baby, and Captain Spaulding is that the local sheriff John Quincy Wydell (William Forsythe) has a personal vendetta against them due to the death of his police officer brother. He has vowed to "kill every member of the family and drink their blood" and swears that Otis and Baby in particular will "feel the pain of every last victim."

It all comes to a head when Wydell manages to trace Otis, Baby, and Spaulding to their friend Rondo's (Danny Trejo) brothel where they've been holed up and unleashes his vengeance and rage against all three of them. We won't spoil the ending here, but we'll say that it doesn't all end as we think it might and there are some scenes here that would have seemed beyond the ability of a fledgling director like Zombie to shoot.

With House of 1000 Corpses, Rob Zombie was trying to pay homage to the horror movies that moved him in his youth and inspired much of his music both on his own and with his band White Zombie. He even owes his entire stage persona to the works of Tobe Hooper, George A. Romero, and Wes Craven, to name a few. In The Devil's Rejects he is attempting to prove that the horror movie can be both disturbing and artful, compelling and grotesque, hard to watch and hard to turn away from, all at the same time. On most of these levels, he succeeds.

It is interesting to note that George A. Romero, one of Zombie's influences, made the "zombie movie" what it is today. If House of 1000 Corpses and The Devil's Rejects are any indication, the next generation will have a new breed of horror film to set the standards and it will be known as the "Rob Zombie Movie."

0
Comments
© 2006-2020 LoveToKnow, Corp., except where otherwise noted. All Rights Reserved.
The Devil's Rejects