2005's adventure fantasy The Brothers Grimm is a movie to watch when you're in a popcorn-chomping frame of mind and more interested in amusing bits and vivid action sequences than in a taut and plausible storyline. The premise, although over-the-top, is coherent enough, but it's in the plotline where things get muddled, as muddled as trying to find your way through a haunted forest by leaving a trail of breadcrumbs.

Con Artists Against the Supernatural 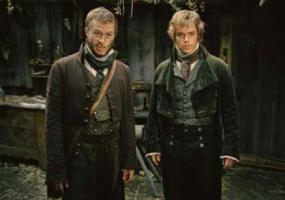 Most people are familiar with the name Grimm and know the brothers as tellers of folklore and fairy tales. But as presented in The Brothers Grimm, brothers Wilhelm (Matt Damon) and Jacob (Heath Ledger) are traveling con artists, 19th Century ghostbusters who create fake psychic phenomena to exorcise for substantial fees. They use a wide variety of show business and circus-style tricks to fool their clients, and business is good.

The setting is French-occupied Germany during the Napoleonic era, and the brothers run afoul of the occupation authorities. They are arrested by the troops of General Delatombe (Jonathan Pryce), and it looks like a one way trip to the guillotine, but Delatombe has a proposition for them. He knows exactly what they are, tricksters and con artists, and he wants them to help catch another of their kind.

But This Time, It's Real

Children are disappearing in the spooky and mysterious forest of Marbaden, in circumstances that feed the superstitions of the local inhabitants. The French have been unable to catch the perpetrator, so the Grimms are charged with determining how the trick is accomplished and returning the children.

Accompanied by a minder, Delatombe's torturer, Cavaldi (Peter Stormare), and local trapper and beautiful love-interest Angelika (Lena Headey), the brothers venture into the forest. While it's perfectly permissible from a plotting standpoint to fall back and regroup once, the Grimm party enters and exits the forest three or four times!

Wilhelm and Jacob are quite impressed by their unseen opponent, amazed at the mastery of the tricks they are seeing. The trees move!

Of course, what's actually going on is real magic, not tricks, and the brothers' cheesy homemade mirrored armor isn't going to help them.

The Queen In The Tower

The cause of the haunting, and of the children's disappearances, is the olden Queen in a tower in the center of the forest. And I do mean olden! Five hundred years ago, the evil queen found a spell for eternal life. Unfortunately for her, the spell said nothing about eternal youth, so the queen lies in the topmost tower, unspeakably old, barely able to move, while her reflection in the magic mirror shows her in her prime. The children are needed for a new spell which will restore the queen's youth.

Two of the kidnapped children are Angelika's sisters, and an even dozen is required for the spell.

To overcome the Queen's plot, the brothers must overcome their cynical disbelief in magic and their own lifelong sibling rivalry.

The Brothers Grimm is probably too spooky for younger children. For older children and adults, there is humor and action, and the scenes is absorbing. Film students might also enjoy this as an exercise in "how would I fix this script."

The Brothers Grimm was directed by Terry Gilliam (12 Monkeys, Brazil) and written by Ehren Kruger (The Skeleton Key, The Ring).