Syriana is not for everyone. Syriana's slow pace and convoluted, multilayered story line has at least four distinct subplots, which require the viewer to think and pay close attention. Shifting from Washington to Europe to the Middle East, director Stephen Gaghan skillfully transitions quickly and often from one subplot to another and from one venue to the next. Syriana is one of the most intriguing explorations of political issues since Costa-Gavras film Z in 1969.

Producer George Clooney's political point of view might concern some moviegoers because of its negative view of US policies in regard to world oil supplies. However, all of the major players in the oil game-American, European, Arab, Chinese-are tarred with the same brush. Although clearly disclaimed as a work of fiction, Syriana has the look and feel of a well-constructed and researched documentary. It's easy to believe the web of intrigue it weaves behind the greed-soaked world of international politics, money and oil.

George Clooney's role as Robert Barnes, a veteran CIA operative whose knowledge has become a liability instead of an asset to the current political regime in Washington, is reminiscent of le Carré's hero George Smiley. Clooney put on weight and let his hair and beard grow out and go gray for this role. Clooney's low key performance and inconspicuous appearance allows Syriana to become an ensemble film rather than a vehicle for his star power. 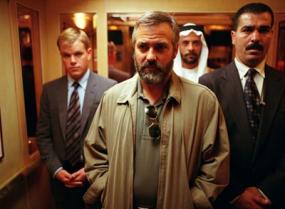 Major roles in the film are played by well known leads and character actors, including George Clooney, Matt Damon, Jeffrey Wright, Chris Cooper, William Hurt, Amanda Peet, and Christopher Plummer, as well as many unknown actors. No one major role stands out, although Clooney, Damon, and Plummer play characters around whom many of the major events of the film revolve. By using an ensemble cast without a single hero or heroine at its heart, Gaghan allows the subplots of the film to weave rhythmically and inevitably into an evil tapestry at the heart of the film-a tapestry depicting the corruption, greed, and evil played out around the moneyed and powerful who control worldwide oil interests.

In the core plot, Plummer plays executive Dean Whiting who oversees the merger of a Texas oil company, Connex, and a smaller oil company called Killen. Killen clearly has Chinese connections. Somehow, this merger allows US interests to tap strategic Kazakhstan oil fields recently acquired by the Chinese. At the same time, Whiting cuts a deal with the second son of an ailing Arab sheikh, to assure that he will have an ally at the head of the prince's oil-rich but unnamed country when the sheikh dies. Whiting's support of the prince also assures the support of the US government.

Matt Damon plays Bryan Woodman, a young analyst for an energy consulting company in Switzerland. As part of his duties, he is ordered, with his wife and young sons, to attend a house party thrown by the sheikh. A tragic accident at the party results in his 6-year-old son's death. The sheikh's first son, in trying to make amends for the accident, offers him a financially lucrative deal, which he ultimately accepts. Convinced that the first son has the interests of his people at heart, Woodman ends up helping him come up with a strategy that will interfere with the sheikh's plan to make his second son the next leader of the country. The US is clearly meddling in the internal affairs of the country, and the second son has Whiting's help in maneuvering himself into position to be the next in the line of succession.

Jeffrey Wright, plays Bennett Holiday, a staff attorney with the large law firm that handles legal affairs for Plummer's company is, in effect, a double agent. His allegiance is not only to his bosses and to the management of the various companies they represent, but he has a special relationship to Whiting, reporting to him and strategizing with him to assure that US Justice department officials are handed enough evidence and fall guys to satisfy them, but not enough to hobble the operations of the company.

In the same unnamed Arab country, Connex and Killen celebrate the grand opening of a new refinery by announcing to workers from Pakistan and other Muslim countries that their services will no longer be needed. They will be replaced by Chinese workers. The workers are given a short time to find other work or be deported from the company. The youngest of the workers are approached by Muslim extremists who invite them to camps where they will be fed "lots of lamb" and housed. Brainwashing, disguised as religious education, plus plentiful food and promises of salvation, quickly convince even the most reluctant of the young men that they have found a way to serve God and to improve the lives of their families.

Gaghan takes almost the full 126 minute running time to spin out the individual plot lines so that they can be woven into the whole cloth of the film. None of the characters has the big picture. Each is simply playing out a piece of action, but all of the pieces come together in an impressive whole that reflects the power of oil interests worldwide, the corruption and intrigue involved in protecting and promoting those interests, and the involvement of governments, including the US government, in those interests.