Everyone knows the story of the Sleeping Beauty but only Walt Disney could bring the story of the princess cursed by a malevolent fairy to life so masterfully as in this perennial favorite. This family movie was first released in 1959 and still endures as one of the best-loved Disney movies of all time.

A Princess Is Born

King Stefan and his Queen celebrate the birth of a baby daughter by throwing a magnificent celebration, including all of the dignitaries of the land and the king and prince of the neighboring kingdom. Prince Philip is to be married to the Princess Aurora when she is sixteen. But the King and Queen forgot one important invitation. The wicked fairy Maleficent was left off the guest list. Maleficent appears just as fairies Flora and Fauna have bestowed on the infant princess their gifts of beauty and song. Maleficent gives the child a gift as well: Before the sun sets on her sixteenth birthday, the Princess Aurora will prick her finger on the spindle of a spinning wheel and die. The fairy Merryweather cannot undo Maleficent's curse, but she can modify it. She tells the horrified King and Queen that her gift is life: Aurora will not die when she pricks her finger but will fall asleep until awakened by love's first kiss.

Protection for the Princess

King Stefan orders all of the spinning wheels in his kingdom to be burnt, but the three good fairies know this will not stop Maleficent. They propose to the King and Queen that the infant should be entrusted to them. They will take her to an abandoned woodcutter's cottage deep in the forest and raise her there as their own. The four will be disguised as peasants, and they will not return until after sundown on the princess's sixteenth birthday. That way, they hope, they can thwart Maleficent's evil plan. And so they go into exile; the princess is raised as Brier Rose and does not know her true identity. And Maleficent, though she searches unceasingly, cannot find a trace of the princess.

Brier Rose's protectors have sheltered her from all other company, and she reaches her sixteenth birthday without ever meeting a man. Flora, Fauna, and Merryweather send her out of the cottage on her sixteenth birthday so that they can prepare a surprise party for her. When Flora and Merryweather get into an argument over what colour the girl's dress should be, the sparks from their wand catch the attention of Maleficent's pet crow, who discovers the cottage and overhears the identity of the girl who has been living there all these years.

While Rose is wandering through the woods, she sings "Once Upon a Dream" (also known as "The Sleeping Beauty Waltz"), and her beautiful voice catches the attention of the prince, who is riding through the forest. He comes and dances with her, and they spend a lovely few moments together before Rose becomes frightened by what she has done and runs away. As she leaves, she tells him to come to the cottage that evening.

When Rose returns to the cottage, she is floating on air with her newfound love. When she tells the fairies of the boy she met, they are forced to tell her who she really is, and that she must never see the other boy again, because she is betrothed to Prince Philip. Aurora is devastated.

The four women return that evening to King Stefan's castle, Aurora in a haze of sorrow and despair. When the fairies leave Aurora alone for a few moments, Maleficent, alerted by her pet, appears in the room and leads Aurora to a tower room, where the girls pricks her finger and falls down in a dead sleep. When the fairies discover what has happened, they put everyone in the castle to sleep until the spell is lifted. Then a chance word by King Hubert reveals that Prince Philip met a peasant girl in the woods that day, and he wants to marry her, not the princess. The fairies remember Aurora's telling them she'd invited the boy she met to the cottage, and they race to the cottage to meet him.

Maleficent Does Her Worst 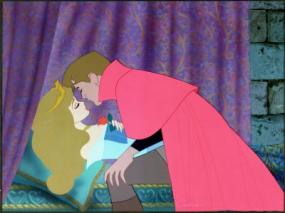 The evil Maleficent has beaten them to the cottage and kidnapped Philip, chaining him in her dungeon so he cannot release the princess from the spell. It is she who reveals to Philip that the peasant maiden he loves is none other than the Princess Aurora, to whom he has been betrothed for sixteen years, and she taunts him with his powerlessness.

But the good fairies have given Philip a Shield of Virtue and a Sword of Truth to battle whatever obstacles face him. When he hacks his way through the thorns, Maleficent confronts him in the form of a giant dragon. The courageous prince charges at her and fights bravely, and finally throws his sword straight into the dragon's heart.

Philip makes his way into the castle where his Sleeping Beauty lies. Recognizing her as his loved "peasant girl," he leans down and kisses her, and she wakes, lifting the spell on the whole court. Philip and Aurora waltz at their bethrothal celebration amid great rejoicing over the safe return of the princess to her family.