From the opening scene of 2004's Sky Captain and the World of Tomorrow, we know that we're in a different sort of science fiction actioner. The luxury zeppelin Hindenburg III docks and offloads passengers at the topmost tower of the Empire State Building. This is the future as imagined by the past.

The second half of the film's title should give you a clue - "The World of Tomorrow" was the theme of the 1939 New York World's Fair and the ghosts of that Fair's iconic Trylon and Perisphere seem to hover over every Art Deco frame. (This is a movie as much for Art Deco fans as it is for action-adventure fans.)

Another unusual feature of Sky Captain and the World of Tomorrow is the way it was made. Virtually everything but the actors is computer generated. Every scene was shot blue-screen, with the background and gigantic stomping robots added in later. Even the villain, though a real actor, is inserted; the movie uses decades-old footage of the late Lord Laurence Olivier with the permission of his estate.

The inserted computer generated action and backgrounds has been given a misty, slighty grainy sepia-toned appearance, enhancing the feel of watching science fiction direct from the 1930s. Some viewers will find the effect intensely cool, while others, no doubt, will find it annoying.

Sky Captain Versus the Giant Robots

The plot is whiz-bang fun from an earlier and more innocent era. While ace reporter Polly Perkins (Gwyneth Paltrow) investigates a story about missing scientists, her former boyfriend Joe "Sky Captain" Sullivan (Jude Law) and his team of aerial mercenaries is called in by the authorities to deal with gigantic robots.

The giant robots fly into New York City, morph into walkers that are approximately King Kong size, and stomp through the city smashing cars and pedestrians on their way to uprooting and extracting the city's power plants. This is only one instance in a series where robot vandals are stealing technology and taking it to an undisclosed location. 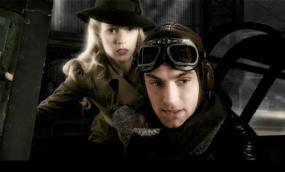 Polly's story dovetails with Joe's, and Polly tags along with Joe, the pair bickering and squabbling in the finest 1930s screwball comedy romantic tradition.

The robots attack and devastate Sky Captain's island base, kidnapping his tech whiz sidekick Dex (Giovanni Ribisi), but not before Dex leaves a clue that sends Joe and Polly on the trail of the robots and the evil genius mastermind behind them.

No one familiar with the genre will be surprised to learn that the search takes them to the high Himalayas and then to an uncharted island in the Pacific, both well-known stomping grounds for evil mad scientists.

And of course, the fate of the entire world hinges on our heroes succeeding in thwarting the villain's foul designs...

Sky Captain and the World of Tomorrow Credits

Sky Captain and the World of Tomorrow was written and directed by Kerry Conran.

0
Comments
© 2006-2021 LoveToKnow, Corp., except where otherwise noted. All Rights Reserved.
Sky Captain and the World of Tomorrow