The 1952 movie musical Singin' In The Rain was essentially created backwards. Most movie musicals begin as stage musicals, with songs created to fit the story. But for Singin' In The Rain, Producer Arthur Freed gave screenwriters Betty Comden and Adolph Green a seemingly impossible assignment - to script a musical by starting with the songs and making the story fit them.

The songs were ones to which Freed already possessed the rights because he'd penned most of them himself, primarily in the 1920s and 1930s. The songs were not only old, they were familiar, having been used in other MGM musicals throughout the years.

It sounds like a recipe for an incoherent flop. Amazingly, it worked so well that Singin' In The Rain now makes every list of most loved musicals.

A Movie About Making Movies

The writers made the songs work for the story by using their age and familiarity rather than trying to work around it. They made a movie about making movies. 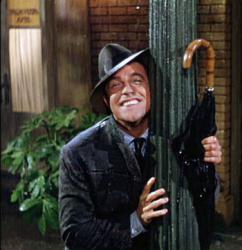 The year is 1927 and Don Lockwood (Gene Kelly) and Lena Lamont (Jean Hagen) are the reigning god and goddess of the silver screen. The two have starred together in so many silent films that fans are convinced they must be a couple off-screen as well. Lena believes the publicity herself, but Don is uninterested in her. His attention has been snagged by young chorine and aspiring serious actress Kathy Selden (Debbie Reynolds).

This triangle plays out against the bombshell development that transforms Hollywood, the advent of sound.

It is a historical fact that the coming of sound destroyed many careers in Hollywood, as the exaggerated overacting of the silents became laughably unnecessary and as many beautiful stars were exposed by the microphones as having soulful eyes but silly voices. It was a boom time for drama and voice coaches.

Lockwood and Lamont's producers have to quickly adapt and turn their next epic The Dueling Cavalier into a talking picture. The scenes of the studio adjusting to filming with sound are hilarious. When the movie is finished, a preview audience laughs it out of the theater. Lockwood and Lamont are finished in this town.

Or... are they? Can the movie be saved by turning it into a musical? Can Lena's dreadful voice be dubbed? Can Don thwart Lena's attempts to use to her considerable clout to wreck Kathy's budding career?

Not Just Singin' in the Rain, Dancing!

Since this is a Gene Kelly movie, of course there's not just singing, there's dancing, lots of it. There is Gene Kelly's balletic athleticism, Donald O'Conner as best friend Cosmo Brown turning dance into unparalleled physical humor, and legs-up-to-there Cyd Charisse as a sultry nameless dancer in a dream sequence. And the most memorable song and dance number in Singin' In The Rain is the title song, with Kelly partnering with an umbrella.

In theatrical release, Singin' In The Rain was a modest success, garnering moderately positive reviews. Its reputation and popularity has grown over the years to its current status as a classic.

Comments
© 2006-2021 LoveToKnow, Corp., except where otherwise noted. All Rights Reserved.
Singin' In The Rain