The irreverent fairy-tale begun in the animated family movie Shrek continues in Shrek 2 (2004) when Shrek and Fiona return from their honeymoon and find that they must face her parents.

Shrek 2 opens with Shrek and Fiona's honeymoon, where they are clearly enjoying all of the wonders of the typical happily-ever-after. But when they return to the swamp, they find that they are not alone -- Donkey (Eddie Murphy) is there, and he's not easy to get rid of. And just when they are finally alone again, a messenger from Fiona's parents arrives with an order summoning them to Far Far Away for a celebration of the wedding. Shrek (Mike Myers) does not want to go, as he is certain that Fiona's parents will not be thrilled with an ogre for a son-in-law. But after a terrific row with Fiona (Cameron Diaz), he reluctantly climbs into the carriage for the journey.

Donkey goes with them because Dragon is moody and grouchy and Donkey wants to get away. And Donkey manages to be a nuisance on the trip, constantly asking "Are we there yet" and making obnoxious noises. But they finally arrive in the kingdom of Far Far Away, which is just as beautiful and grand as Shrek had feared.

When Shrek and Fiona get out of the carriage, it's clear that the Queen and King are not thrilled with either the appearance of their daughter (who is not the beautiful young girl they expected, but a large, green ogre) or her ogre husband. And things just get more and more tense. The family dinner that evening is a masterpiece of culinary achievement, but the family misses it completely, because Shrek and King Harold (John Cleese) are engaged in an altercation that is one step shy of an all out food-fight. Fiona finally flees the dining table in tears, furious with both her father and her husband.

Fiona's tears summon her Fairy Godmother (Jennifer Saunders), who tries to help, but succeeds only in overwhelming Fiona. And then Shrek arrives, wanting to pack up and leave. The fairy godmother is shocked when Fiona introduces Shrek as her husband, and she leaves Shrek and Fiona to a second argument, in which Fiona points out that she has made a lot of changes for Shrek, and maybe he should think about that when he says that he is an ogre and he isn't going to change. Meanwhile, Fiona's parents are having an argument of their own, but it's interrupted by the arrival of the fairy godmother on the balcony. King Harold doesn't want Queen Lillian (Julie Andrews) to know about his dealings with the Godmother, so he climbs into her carriage and goes for a ride with her and her son, Prince Charming (Rupert Everett). It becomes clear that Harold and the Godmother have a deal that included Fiona marrying Charming, and Godmother isn't going to let Harold off lightly. He's got to fix the problem, and quickly.

Harold goes incognito to a bar to hire a hit man to take out Shrek, and is referred to Puss in Boots (Antonio Banderas), who agrees to kill Shrek. Harold returns to the castle and arranges to meet Shrek in the forest the next morning to "get to know each other better." When Shrek and Donkey arrive at the appointed place, it's not Harold who's waiting for them ... it's Puss in Boots. But Puss fails to kills Shrek, and then joins forces with him to win back Fiona and earn her parents' respect, if he can't win their love and blessing.

Fiona wakes up alone and finds her diary lying open on the desk. Shrek had been reading it the night before when Harold interrupted him with the invitation. Fiona is worried and upset when she cannot find Shrek, and her worry is intensified when her parents cannot tell her where he is, either.

Happily Ever After Potion

Shrek makes his way to the Fairy Godmother's office to find a way to make Fiona happy. But the Fairy Godmother insults him and sends him away, thinking that she's discouraged him from trying to make things right with his wife. But she has underestimated Shrek's love for Fiona. Shrek, Donkey, and Puss disguise themselves as workers in the Godmother's potions factory and gain access to the storage area where all of the potions are kept. Shrek manages to get a vial of "Happily Ever After" before they are discovered and must fight their way out of the factory. When they have escaped, Shrek and Donkey both take a bit of the potion, which is supposed to affect both them and the ones they love.

When she realizes which potion Shrek has stolen, the Fairy Godmother hatches a plan to force Fiona to fall in love with Prince Charming and leave Shrek forever. She gives Harold a potion and tells him to make sure that Fiona drinks it before going to the wedding celebration ball, where Charming will present himself as Fiona's husband, altered by the Happily Ever After potion. Fiona will kiss him and love him forever, because the potion that Harold gives her will make her fall in love with the first person she kisses.

When Shrek and Donkey wake up the next morning, Donkey is a white stallion, and Shrek is a handsome young man. Puss reads the potion bottle and discovers that Shrek must kiss his true love by midnight for the effects of the potion to be permanent. They head back to the city to find Fiona. Meanwhile, Fiona has awakened and discovered that she no longer looks like an ogre; she's reverted to her human form. She screams, and Shrek goes running to find her. Shrek is trapped by the Fairy Godmother, and Fiona is waylaid by Prince Charming, who presents himself to Fiona and her parents as Shrek. 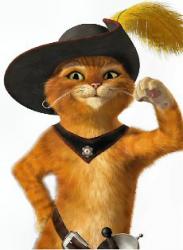 Shrek, Donkey, and Puss go to a local bar to drown Shrek's sorrows. While there, they overhear a conversation between King Harold, Fairy Godmother, and Prince Charming, and they discover the plot. They race off to the ball to prevent Fiona from being tricked. Way back in the swamp, Gingerbread Man, Pinocchio, and the other fairy-tale creatures are watching television when they see Shrek, Donkey, and Puss being arrested. They leave the swamp to come to Shrek's rescue. Fiona is in her room in the castle, terribly depressed over the way things have turned out. Her dad comes in with cups of tea and encourages her to come to the ball, but she does not want to. She doesn't like what "Shrek" has become -- she wants her husband back.

At the ball, Charming "Shrek" continues to disgust Fiona, and the Fairy Godmother steps in to make the kiss between them happen. But the real Shrek has been sprung from prison and has called in a favor from the Muffin Man: with the help of the giant gingerbread man Mongo, he breaks into the castle and arrives at the ball just in time to prevent Fiona from kissing the wrong man. With only a few moments until midnight, it's the final showdown between Shrek and the Fairy Godmother, and all of Shrek's friends pitch in to help him save the woman he loves.

The Godmother tells Charming to kiss Fiona because she's taken the potion, but when he kisses her, nothing happens. Harold didn't give her the potion, and the Godmother turns him back into a frog when he tries to protect Shrek from her final attempt to kill him. Harold apologizes to Shrek and Fiona and gives them his blessing, and then apologizes to Lillian for having never told her the truth about who he really was. As the clock strikes midnight, Shrek tells Fiona that if she wants to keep him handsome, as he is now, then she must kiss him to make the Happily Ever After spell permanent. But Fiona refuses -- she wants to live happily ever after with the ogre she married. And so, when the clock finishes chiming, Shrek, Fiona, and Donkey regain their normal forms. They revive the celebration to a rousing rendition of "Livin' la Vida Loca."

While there is no overt sex in Shrek 2, there is a lot of crude humour and innuendo that may be of concern to some parents. There is also a good bit of cartoon violence. Shrek 2 is intended to be a family movie, but these concerns may cause some parents to restrict it to older children.