In the 2001 animated family movie Shrek, true love's first kiss may not result in quite the expected outcome -- for anyone.

Shrek (voiced by Mike Myers) is an ogre who is determined to keep his privacy. His home in a swamp is deliberately isolated from all other society, and he has posted signs to keep everyone away. The local villagers constantly intrude on his privacy, waving pitchforks and other weapons, and saying unkind things about the ogre they've never bothered to get to know.

Farquaad (John Lithgow) is an ambitious, conceited freak who wants two things: to rid his kingdom of all fairy-tale creatures and to become king of Dulac -- the "perfect kingdom." Even in considering which princess to rescue and marry, Farquaad is obsessed with perfection -- probably to compensate for the fact that he's only about 4 feet tall. He must marry a princess to become king, but he isn't even willing to rescue her himself; he sends someone else to do it for him.

In the highest room of the tallest tower of the dragon's keep, Princess Fiona (Cameron Diaz) languishes, waiting for Prince Charming to come and release her with the traditional "love's first kiss." But the beautiful Fiona has a dreadful secret, and only true love's first kiss can release her from both the dragon's keep and the spell that torments her from sundown to sunrise. 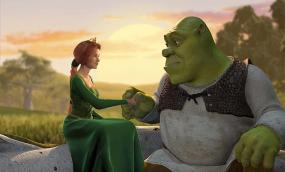 Back in the swamp, the ogre's privacy has been compromised once again, this time as a result of Farquaad's efforts to remove fairy-tale creatures from his land. First, Shrek accidentally saves a chatterbox donkey from the king's men, and then Donkey (Eddie Murphy) refuses to leave. That night, the ogre's home is invaded by the rest of the fairy-tale creatures, who have been relocated to the swamp by the king's men. Furious, he sets off, with Donkey in train, to confront Farquaad and demand the removal of the squatters. But when they arrive in Dulac, Farquaad sets his entire army on the twosome, promising the quest to rescue Fiona to the one who conquers the ogre. Unfortunately for Farquaad, the Ogre defeats the entire assembly of knights. So Farquaad chages tack, and tells our green friend that he will be going on the quest. If Shrek is successful in returning Fiona to Farquaad, then he will get his swamp back and the fairy-tale creatures will be removed.

The duo finally arrive at the Dragon's castle, and Shrek manages to rescue Fiona, although his methods are rather unorthodox, and Fiona is understandably confused -- she's been expecting Prince Charming for years, and what she gets is an ogre. While looking for the princess, the twosome encounter the Dragon. The Donkey talks his way out of being burnt to a crisp, but right into the affections of the Dragon, who is desolate when Donkey escapes with the ogre and the princess across the bridge. The Dragon is chained to the castle wall, and cannot follow them.

On the trip back to Dulac, the ogre and Fiona are first quite antagonistic toward each other, but the long journey gives them a lot of time to get to know one another better. They begin to fall in love. Neither really wants to admit it, however; Fiona because she wants the spell that torments her to be finally broken, and the ogre because he is afraid of being rejected by the beautiful princess. When Donkey discovers Fiona's terrible secret, Shrek overhears the last part of their conversation and thinks that Fiona is revolted by him. Hurt and disappointed, he walks the rest of the way to Dulac and tells Farquaad where Fiona is ... just outside the city. Fiona has decided to admit the truth to her love when he returns at daybreak, still angry. Farquaad arrives just behind him, and the confused and unhappy Fiona agrees to marry Farquaad on the condition that the wedding take place that day.

After Fiona leaves, Shrek tells off the Donkey for stabbing him in the back by talking to Fiona, and then stalks off to sulk in his swamp. Fiona wanders about the castle in Dulac, unenthusiastically preparing for a wedding she doesn't really want to participate in. And Donkey wanders off to a stream, where he encounters the Dragon, who is weeping for her lost love. This second encounter with the dragon gives Donkey the courage to confront the ogre about his anti-social behaviour and to tell him the truth about the conversation with Fiona. Stunned, Shrek races to Dulac to stop the wedding, arriving just in time ... the wedding is almost over, and the sun is about to set. Fiona is shocked by his admission of love, but Farquaad is amused. Fiona is torn -- does she kiss Farquaad, whom she despises, but who will, she thinks, release her from the terrible spell? Or does she accept her true love's declaration of love?

As Fiona hesitates, she realizes that the sun is about to set. So she steps away from both of her would-be lovers and lets the spell turn her into ... an ogre. Farquaad is revolted and threatens to lock her back in the tower forever. Our leading ogre tries to protect her. And then Donkey arrives with the dragon, who promptly eats Farquaad, leaving the way open for the lovebirds to live happily ever after.

While there is no overt sex in this movie, there is a lot of crude humour and innuendo that may be of concern to some parents. There is also a good bit of cartoon violence. This is intended to be a family movie, but these concerns may cause some parents to restrict it to older children.