The story of Robin Hood is familiar to everyone, and Walt Disney's animated classic is a wonderful retelling of the centuries-old legend of the outlaw who robs from the rich to give to the poor. This is one of those family movies that parents don't mind watching repeatedly with their children.

Robin Hood and Little John spend their days trying to elude the deputies of the Sheriff of Nottingham, who wants more than anything to please Prince John by capturing the outlaw and putting a stop to his marauding. Robin and his merry men plunder only the rich, so they can relieve the suffering of the poor, over-taxed people of England, but the King and the Sheriff cannot see this situation as a good thing -- probably because they are some of the rich who are continually being robbed.

One day, the king's carriage travels through Sherwood forest, and Robin and Little John disguise themselves as gypsy women, using the opportunity to rob King John of jewels, gold, and the hubcaps off of his carriage. Incensed by the trickery and humiliation, King John vows revenge.

The Phony King of England

King John isn't the real king; he's only been left as a regent over the country while King Richard is away fighting in one of the Crusades. But John is a weak and selfish king, who abuses his royal power for his own gain. He taxes the people into poverty and throws them into prison if they cannot pay. His royal adviser, Sir Hiss, encourages King John's excesses with his sycophantic devotion to the King.

Knowing that Robin Hood is in love with the lovely Maid Marian, and also aware of Robin's spectacular abilities as an archer, King John sets a trap for the outlaw. He organizes a tournament and offers both a golden arrow and a kiss from Maid Marian as the prize. Robin cannot resist this temptation; he disguises himself as a stork and wins the tournament. But the king is certain that only Robin Hood could have beaten the Sheriff of Nottingham and the rest of the field; he exposes Robin's true identity and orders him killed instantly.

Marian throws herself at the king's feet and begs him to spare Robin's life. But the king declares that the traitors to the crown must die. Robin shouts that the crown belongs to King Richard, and a brawl ensues. Robin escapes with Marian into the forest, where they pledge their love for one another.

Another Trap for Robin Hood 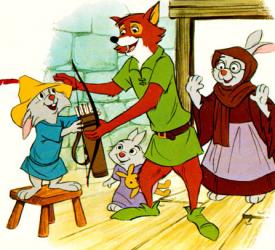 But King John is furious over this second public humiliation at the hands of Robin Hood, and he is determined to stop Robin, no matter the cost. When he learns that Friar Tuck has been arrested for fighting with the Sheriff of Nottingham, John decides to use the Friar as bait to lure Robin to the castle, where his men can finally capture the outlaw. The crafty Robin knows it's a trap, and he arranges to rescue Tuck without being captured. He disguises himself as one of Nottingham's loyal minions and gains access to the jail. He smuggles Little John into the cells, and he releases all of the debtors.

While Little John is freeing the prisoners, Robin has climbed up to the King's bedchamber, where the King stores all of his ill-gotten money. He proceeds to move all of the sacks of gold from the king's bedroom to the jail, where Friar Tuck and Little John load the gold onto the cart by which the prisoners are escaping. One bag, however, comes open and drops coins on the sleeping Sheriff below. Another wild chase ensues, with the Sheriff trying to stop the jailbreak and capture Robin, who is trapped in the castle. In the melee, the castle catches fire, and Robin is forced to jump into the moat to save himself. There, the Sheriff's men shoot him. But Robin manages to escape the flying arrows yet again. The King's trap has failed, and he has destroyed the castle into the bargain.

Finally, King Richard returns. He sends John and his minions to jail, pardons Robin, and gives his consent to the marriage of Robin and Marian. They ride off into the sunset, to live happily ever after.