Disney's the Princess Diaries 1 and 2 comprise an archetypal fairy tale fantasy. Fifteen-year-old Mia (Anne Hathaway)-a social outcast in her exclusive private school-has to decide if she wants to accept the role of Crown Princess and heir to the throne of the small country, Genovia. Unbeknownst to her, Mia's late father was the Crown Prince of Genovia.

In Princess Diaries 1, Mia's grandmother, Queen Clarisse Renaldi (Julie Andrews), arrives in San Francisco on a royal visit and summons Mia to tea, where she tells her about her origins. She also tells Mia that she is eager to have her accept the role of Crown Princess. Mia is given until her sixteenth birthday to make a decision. She is instructed to keep her roots a secret to avoid arousing the interest of the press.

Mia confronts her mother, a bohemian San Francisco artist, who has never told her about her father's royal birthright.

Under pressure to share with her best friend Lilly, Mia tells her the secret of her parentage. Lilly says she will keep the secret. Manipulated by unkind schoolmates, Mia is invited to a beach party where she is exposed as the heir apparent of Genovia. Unwanted attention from the press ensues, and Queen Clarissa blames Mia for the leak. Mia decides she is not suited for the role of Crown Princess and tells her grandmother she won't accept the crown.

Knowing she has told only one person her secret, Mia blames Lilly for the exposure. Mia's strained relationship with Lilly and Lilly's brother, Michael, further isolates her.

The balance of the story revolves around Mia's interactions with snobby kids at her school, her grandmother's attempts to train her in the social niceties expected of royalty, and a crucial letter from her father that ultimately influences her decision.

A fine performance by Hector Elizondo as Joe, Queen Clarisse's companion and chief of security, provides a protective paternal influence for Mia. In addition, his role provides a unifying thread throughout the story, protecting Mia and providing support for the queen. 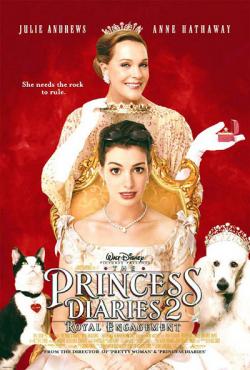 Princess Diaries 2 continues the story in Genovia, where we learn Mia must immediately take the crown from her grandmother. However, Genovian law requires that Mia marry before she can be coronated. A line of suitors assembles. Only two appear to be viable candidates for Mia's hand in marriage, and one of the two is sponsored by the nefarious rival for the throne, Mia's cousin. With the aid of his nasty wife, the cousin tries his hand at court intrigue. The usual fairy-tale misunderstandings and entanglements ensue, leading to the inevitable happy ending.

Princess Diaries 2 features music and dance sequences absent from the first film, and a vocal performance by Julie Andrews is featured. Lots of pretty little girls, princesses from all over the world, particpate in pre-wedding festivities. This will likely appeal to all of the wannabe princesses who see the film.

Critics and audiences rate Princess Diaries 1 and 2 as average to good. Rated "G" for general audience, this film is suitable for all ages. However, it will clearly have the greatest appeal for pre-teen girls and their mothers (perhaps their grandmothers, as well). Fans of Julie Andrews will enjoy seeing her once again on the screen, even in a somewhat frivolous role.

Friendship, loyalty, and transformation of an "ugly duckling" are major sub-themes of the film. Mia's friend Lilly Moscowitz is an important character in both the original film and the sequel. Her sense of right and wrong and her loyalty to her friends and family provide a model for Mia's behavior. Her political activism provides a lynch pin in Mia decision making process. On the other hand, Mia's deceitful cousin and his wife provide both comic relief and an evil element that prevent the movie from becoming overly saccharin.

Garry Marshall's direction, fine acting by Julie Andrews and Hector Elizondo, and many comedic elements assure that the audience will enjoy the light fluff that makes up Princess Diaries 1 and 2. Almost anyone who enjoys a good fairy tale in which good ultimately eclipses evil will enjoy these movies. While not great films, Princess Diaries 1 and 2 will provide an afternoon of enjoyable family viewing, though tea and cookies seem a more likely movie treat than popcorn with this film.