The Pretty in Pink (1986) plot can be summed up as simply as poor girl meets rich boy and falls in love. OK. So, that plot synopsis can be applied to hundreds of movies. What made Pretty in Pink special was not so much the plot as it was the reflection of the 80's, when the in crowd wore polo shirts, penny loafers, the right brand of jeans, pastels, and let us not forget the big hair.

Even so, there was a plot, and it is deep enough to keep the attention of teenagers and adults alike as poor girl Andi's, played by Brat Packer Molly Ringwald, affinity for pink and self-designed clothes makes her stand out as not only a freak from the wrong side of the tracks, but a truly unlikely match for the preppy, rich, and oh so popular Blane, played by fellow Brat Packer Andrew McCarthy. While Blane and Andi's romance blossoms, their buddies make life tough on them, as if life as a teenager isn't tough enough.

Pretty in Pink writer and executive producer John Hughes is well-known such memorable moves as:

While many of his movies are geared to a younger audience, they all share one thing in common. Hughes takes what could happen in reality and pushes it just a little farther than really necessary for the audience to relate to the characters. 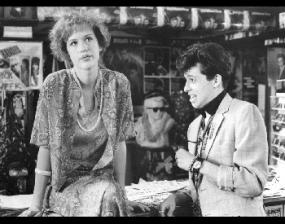 If it isn't bad enough that Andi is a bit of a freak and poor, she is more parent than child to her widower father, played by Harry Dean Stanton, and her best girlfriend is middle-aged woman, played by Annie Potts, who has never really let go over the 60's and is in many ways less mature than the teenage Andi.

Before you get to feeling too sorry for Andi and her tortured romance with pretty boy Blane, in comes Jon Cryer of the current CBS series Two and a Half Men in the role of Duckie, a lovelorn geek with a classic 50's 'do and his own unique sense of style. He plays the fool and the knight in shining armor for Andi, riding in to fight for Andi's honor when it appears Blake is as big of a snob as his rich-kid friends. And like a real gentleman, Duckie walks away when it is apparent Andi still has the hots for Blane.

No movie would be complete without a really bad guy who you just love to hate. In Pretty in Pink, that villain comes in the form of Steph, played by James Spader. Spader looks like he has either been held back in high school for a few years or just matured a whole lot earlier than the rest of the cast. Either way, more than any of Blane's other Andi-hating friends, it is Steph who does the most damage to the Blane and Andi relationship.

It seems like in so many of the teenage romances there has to be at least one party scene where all the kids get together and trash the outsider. Pretty in Pink is no different. When Blane and Andi take their romance public, poor Andi, with her so many other problems, is ridiculed and traumatized by the outright mean attitude the rich kids show her. As if kids being mean to kids mentality in school isn't enough, Hughes makes sure the audience knows that the snotty attitude isn't left in the classrooms.

Comments
© 2006-2021 LoveToKnow, Corp., except where otherwise noted. All Rights Reserved.
Pretty in Pink