1990's Pretty Woman is a new take on the My Fair Lady 'transform the lower-class girl' genre. Set in modern day Los Angeles, it's a feel-good romance about a prostitute and a piranha.

To enjoy this movie, you first must accept one huge improbability at the very start - you have to accept for the duration of the viewing that a young woman who looks like Julia Roberts could find no other employment in Hollywood than as a prostitute. And not even a high-end call girl, but an outright streetwalker. If you can accept that, though, the movie can be fun. And many viewers obviously could make that leap, since Pretty Woman was a hit and the movie that made Roberts a star.

And She's the Heroine

Roberts stars as Vivian Ward, a small-town girl now working the streets on Hollywood Boulevard. She is picked up and offered a highly lucrative week of employment by Edward Lewis (Richard Gere). Edward is in town on business and looking for an attractive woman to escort to business-related social events.

Edward is rich, handsome, successful - and makes Vivian's line of work look honest and moral. Hey, her clients get what they pay for and go away happy. Edward is a corporate raider who buys undervalued companies and then rips them apart and sells the pieces for the quick profit. The way he plays the game of business, his success means someone else's ruin.

The week they spend together transforms both of them. Vivian undergoes an outward transformation. A little shopping therapy with a bottomless credit card goes a long way to restoring a girl's sense of self-worth! 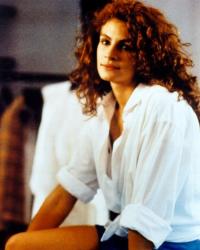 And since the movie is female fantasy wish fulfillment, after all , the accomodations are a ritzy hotel penthouse, and the social engagements that Edward takes Vivian to include dinner in a tony restaurant, going to watch a polo match, and a private jet trip to take in the opera.

Edward has a tougher transformation to go through. He has to regain his conscience. Edward's tough as nails lawyer-partner Phil Stuckey (Jason Alexander) wonders what's wrong with him. Edward himself probably wonders the same thing, as he finds himself actually liking James Morse (Ralph Bellamy) the man whose company he came to Los Angeles to dismember.

In the end, who will Edward side with - his long-time partner who genuinely enjoys the part of the job about crushing the competition, or the fatherly competitor who believes business is about making a quality product? (Hint: I said at the beginning Pretty Woman was a feel-good romance.)

When Edward realizes that a week with Vivian is not enough, he offers her the luxury mistress package, which Vivian now has enough self-esteem to turn down. She's planning to quit the sex trade and go back to school. Will Edward fly out of Vivian's life, or will he come to his senses and propose? (See above hint.)

While Pretty Woman can be fun escapist fantasy for adults who recognize the implausibility of the plot, it's perhaps not suited for children and teens, since it glosses over the downside of life on the streets and makes prostitution look almost like a valid career option.

Pretty Woman was directed by Garry Marshall and written by J.F. Lawton.