Based on the novel by J.M. Barrie, the animated story of Peter Pan has delighted children since 1953. Generations of children who don't want to grow up have longed to follow Peter and Tinkerbell in this most wonderful of family movies animated by Disney.

The Darlings are preparing to go out for the evening, and Mr. Darling cannot find his cufflinks. He goes into the nursery and is further annoyed by finding that the children are acting out the stories of Peter Pan that the oldest child, Wendy, has been telling them. During the process, they have drawn all over his last clean shirtfront and have hidden his cufflinks for gold treasure. When Mr. Darling trips over the dog Nana and everyone rushes to comfort her instead of him, Mr. Darling loses his temper and banishes the dog to the back garden and his oldest child to a room of her own. Everyone is miserable, but Mr. Darling is not to be contradicted. 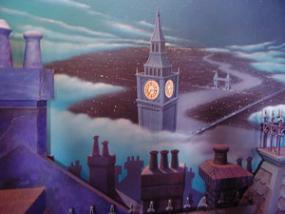 When the children are all tucked into their beds and the Darlings have gone out, Peter Pan comes to the nursery. He is looking for his shadow, which Nana had snatched from him when he surreptitiously visited some time previously to hear Wendy's stories. When he hears that Wendy must grow up and move to her own room, he talks her into going with him to Neverland. Wendy refuses to leave her brothers behind, so she, John, and Michael all join Peter as he teaches them to fly and leads them off to Neverland.

In Neverland, Captain Hook is having a bad morning. He greatly wants revenge, because Peter cut off his hand and fed it to a crocodile. The crocodile liked the hand so much that it now stalks Hook, trying to eat more of him. Suddenly, one of the mates spies Peter standing with Wendy, John, and Michael on a cloud. When Hook starts shooting the ship's cannon at them, Peter tells Tinkerbell to take the children back to the camp where the Lost Boys are. Tinkerbell is jealous of Wendy and Peter's devotion to her, so she tricks the boys into firing rocks at Wendy, in an attempt to knock her out of the sky. Peter is furious, and banishes Tinkerbell forever, but Wendy intervenes and Peter changes the sentence to a week's banishment. Tinkerbell flies off in high dudgeon.

John and Michael go with the Lost Boys to see the Indian encampment while Pan takes Wendy to the Mermaid Lagoon. But the Indians sneak up and take the boys captive. Usually, this game ends with the boys being released, but this time, the Indian chief is furious over the disappearance of Princess Tiger Lily, and he tells the boys that if she is not back by sundown, he will burn them all at the stake.

Peter and Wendy have seen Hook's jolly-boat, and they set the princess free. Hook almost catches Peter, but Wendy screams and saves him, and then the crocodile arrives and sends Hook racing back to his ship in a panic. Peter then takes Tiger Lily back to her father, thus saving the Lost Boys and cementing an alliance with the Indians. However, Peter's cavorting with Tiger Lily makes Wendy jealous, and she determines to take her brothers and go home the next morning. 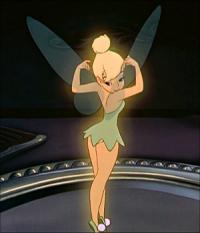 The pirates discover that Peter has banished Tinkerbell, and Hook determines to use this to his advantage. He sends Smee to kidnap her, and tricks her into revealing Peter's hideout. And then Hook throws Tinkerbell into a glass lantern and leaves her caged there while he goes to wreak vengeance on Peter Pan. At the hideout, Wendy has convinced the Lost Boys to go home with her, but Peter refuses to go. As they leave, the pirates snatch them and take them to the pirate ship. Hook leaves a bomb for Peter, who is sulking in a back room and does not see who leaves the beautifully wrapped "gift."

Back at the ship, Hook is insisting that the boys join his crew, and Wendy tells the boys to wait for Peter will save them. Hook laughs and tells Wendy of his plot. Tinkerbell overhears and manages to escape from her cage in her panic to save her beloved Peter. She arrives just in time to snatch the bomb out of his hands as it explodes. Peter Pan searches for Tinkerbell in the wreckage of the hideout, while Hook, having heard the explosion, sends Wendy to walk the plank. There is shock when Wendy walks off the end of the plank and there is no following splash. Peter appears, and he and Hook engage in a swordfight which ends with Hook falling headlong into the sea, where the crocodile is waiting for him. He swims away in a panic, never to menace the Lost Boys or Peter again.

The eternal boy takes Wendy home in Hook's ship, which Tinkerbell makes able to fly. Wendy is reunited with her parents, and her father relents and allows both Wendy and Nana to remain in the nursery.