The Notebook is a 2004 film starring Ryan Gosling and Rachel McAdams as two star-crossed lovers who find their happiness lies within each other. However, the story doesn't end there, and this movie shows the complexities that exist within even the merriest of love stories.

The Creation of the Story

Jeremy Leven wrote the screenplay of The Notebook, while Jan Sardi is credited as writing the adaption. The movie script is based on the heart-wrenching Nicholas Sparks novel of the same name. Leven stated he faced challenges in writing the screenplay because he envisioned an audience that may be apprehensive about accepting such a sweet film. To counter that, he tried to give the story an edge and brought a realness to the characters and their choices.

The Notebook is a movie about the love between a man and a woman in its main stages. It all starts when a poor young man falls in love with a rich young woman. Their obvious differences quickly melt away. The New York Times referred to this as "high-strung, slightly crazed teenagers plunging headlong into first love."

The film gives you a glimpse into three different chapters in the life of Allie Nelson and Noah Calhoun, its lead characters. It shows you what their life was like when they first fell in love, when they reunited and chose happiness with each other despite its complications, and how things were as they grew old when Allie suffers with the advanced stages of Alzheimer's disease.

Differences: The Book vs. The Screenplay vs. Film

The first noticeable difference is the relationship between Noah and Martha Shaw. In the book, the two dated, but in the film, they are just friends. The second noticeable change was with the woman that Noah dated after Allie left; her character was cut out of the film adaptation and screenplay completely. 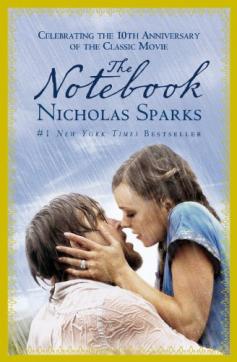 The final and most notable difference is that in the film, Noah and Allie die at the same time. However, in the book, Allie dies, but Noah does not. Noah is one of the main characters in Sparks' follow-up to The Notebook, The Wedding. Otherwise, a few of the other minor differences include:

The screenplay of The Notebook is the basis for a film that has seen ongoing success as it is embraced by film lovers. You may want to remember this trivia when reading the script or watching the film.

If you really love the script of this film or are simply a huge fan of those involved in the movie, there are a few places where you can purchase the script in its entirety.

Enjoying the Screenplay of The Notebook

Although screenplays are meant to be used as the basis for the creation of films, there is a lot that can be enjoyed about reading scripts themselves. With The Notebook, you can especially appreciate the aspects of the story that were left out of the movie and discern for yourself why they may or may not have worked on film. It can also help you appreciate how Jeremy Leven crafted the adaptation of the novel into the basis of the film that is now beloved around the world.