1964's musical My Fair Lady had an illustrious pedigree. Before being brought to the screen, the musical was a hit on Broadway for years, opening in 1956 and starring Rex Harrison and Julie Andrews. The musical itself was based on Pygmalion, a 1916 stage play by George Bernard Shaw. The play and screenplay by Alan Lerner retained the setting of early 20th Century London, which kept in play the class distinctions that would have been less clear-cut by the 1950s. Not to mention giving scope to some luscious sets and costuming.

Rex Harrison stars as Professor Henry Higgins, a crusty old bachelor who is an expert in phonetics. While arguing with his friend Colonel Pickering (Wilfrid Hyde-White), Higgins makes a bet that he can take someone from the lower class and train them to pass in high society just by teaching them how to speak correctly.

The object of his experiment is Eliza Doolittle (Audrey Hepburn), a Cockney girl working as a flower seller on the street. Eliza agrees to the project, hoping that classier speech will enable her to get work in a flower shop.

Hepburn is luminous as Eliza, a tough girl trying to better herself and willing to put up with Higgins in order to do so. Higgins is a tough taskmaster, and also a supremely selfish man who barely seems to notice that Eliza is human. The song "Just You Wait" hilariously outlines Eliza's daydream about all the gruesome ways she's going to get back at Higgins once she's elegant and famous.

"The Rain In Spain" is a musical rendition of Eliza's training, a bunch of nonsense sentences endlessly repeated until Eliza can pronounce them correctly.

Off to the Races 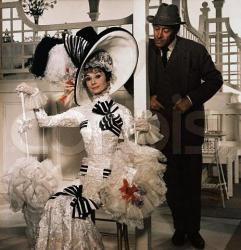 Higgins's first attempt to take Eliza into society is a rousing near-disaster. Going to the opening day of Ascot to watch the horse races, Higgins realizes that, although he has taught Eliza how to pronounce words correctly, she has received no training in what, exactly, to talk about. Nor can Eliza carry off the fashionable languor of the upper-class woman.

But Eliza leaves the races having acquired an admirer, young man about town Freddie Eynsford-Hill (Jeremy Brett). Freddie moons around outside the Higgins residence, singing "On The Street Where You Live."

Eliza now has a brighter alternative to her future in that flower shop - she could accept Freddie. There's a catch, though. Eliza has fallen for Higgins.

Higgins is a mass of contradictions over his feelings for Eliza. On the one hand, "Why Can't A Woman Be More Like A Man?", but when Eliza storms out, he has to admit that "I've Grown Accustomed To Her Face."

The show's ending is rather ambiguous, but you're left with the impression that Eliza does remain with Higgins. (As he doesn't seem inclined to try to overcome that selfishness of his, though, you do wonder how long she's going to put up with him!)

When you're a big enough name on Broadway and you're a man, you're allowed to talk your way through your songs, as Rex Harrison did as Higgins, both on Broadway and in the movie version. Audrey Hepburn, taking over Eliza from Broadway's Eliza, Julie Andrews, has her songs dubbed by Marni Nixon (a Hollywood standby whose voice frequently filled in for the leading ladies of screen musicals).

My Fair Lady Credits and Awards