Take a few classic sci-fi monster flicks, mix in a bit of today's technology as well as a couple of aliens, make it kid-friendly and you have the box office smash, Monsters vs. Aliens. This long-awaited DreamWorks film hit the big screen in March 2009 in IMAX, Real D, 2D and 3D, with the latter version being nothing but phenomenal.

About Monsters vs. Aliens 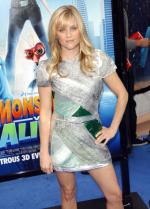 Imagine getting ready to marry the man of your dreams when you are suddenly hit by a radioactive meteor. That happens to the story's main character, Susan Murphy. After the accident, her body absorbs a substance called quantonium and and she grows to gigantic proportions. Government and military personnel are called in. They capture her, rename her "Ginormica" and send her off to a top secret facility that houses other "monsters." Once she arrives at this prison, she gets to know the likes of four other monsters, who not only become her friends, but her cohorts when it comes to saving the planet:

Ginormica will soon be sought after by an alien named Gallaxhar, who needs the quantonium radiating from her body. He sends a giant robot to Earth to defeat the monsters and take back Ginormica, but that plan fails. However, Susan soon realizes that being a monster isn't bad after all. But as soon as she comes to this realization, she is abducted aboard Gallaxhar's spaceship and after a long battle in which her monster friends are kidnapped, has the quantonium extracted from her body. This returns her to her normal size. The substance is then used to clone Gallaxhar into an army with the mission to invade Earth.

Susan is able to defeat Gallaxhar by reabsorbing the quantonium, making her once again a monster. She is able to save her friends as well as the earth from demolition.

Besides the 3D effects, one of the best things about this movie are the parodies of five classic scary monster movies:

Bringing Monsters vs. Aliens to the Big Screen

Will Arnett and Amy Poehler

It took more than 45 million computing hours to create Monsters vs. Aliens, which is eight times more than was used to create the DreamWorks hit, Shrek. The movie grossed $59.3 million its opening weekend and stars:

A Mom's Take on the Movie

This was a great movie for my 7- and 4-year-old children. Certain parts were a bit intense for my daughter, but overall, it didn't give her nightmares. If you are a science fiction fanatic, especially of the cult classics in the 1950s and 1960s, then you will love this film. It is rated PG because of action, but I had no problem taking my kids to see it.