The 2000 comedy Miss Congeniality, takes a familiar theme and plays it for laughs. The ugly duckling transforming into a swan is a staple plot, not just in movies, but in every form of entertainment. Often the story is played as a dreamy fantasy wish-fulfillment. No one would call FBI Agent Gracie Hart (Sandra Bullock) ugly, exactly. But no one would call her poised and feminine either. Gracie is a grown-up tomboy, a clumsy one-of-the-guys type, with a laugh like a donkey. She's just about the last person you would imagine as a beauty pageant contestant.

But when a bomber threatens to blow up the Miss United States pageant, undercover as a pageant contestant is exactly where Gracie goes. Kicking and protesting all the way, but she goes. 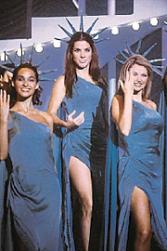 Candice Bergen is excellent here as hard-as-nails former beauty queen and pageant administrator Kathy Morningside, and William Shatner is appropriately smarmy as the pageant's master of ceremonies Stan Fields. Morningside tells the FBI that Gracie needs work before she can plausibly pose as a beauty contestant.

Enter Victor Melling (Michael Caine) washed-up former beauty contestant coach and star-maker. Victor is assigned the task of transforming Gracie. It says a lot about Gracie's character that Bullock is able to mine more physical humor out of walking in high heels than anyone who isn't a man in drag. (As for Michael Caine, what can be said about him other than that he's aged adorably?)

And when Gracie's partner Eric Matthews (Benjamin Bratt) reacts to the polished and trained Gracie as if he's just now noticing that his good buddy is actually a female-type woman; well Victor, ya done good. And we know that this is one comedy that will not be completely devoid of romance.

Now it's on to the pageant, where Gracie has to convince fifty exemplars of bubbly perkiness that she's one of them. And whoops, someone forgot to mention there is a talent competition. Gracie reveals a hidden talent, the ability to play music on the rims of water glasses, but eventually substitutes a self-defense demonstration.

While Miss Congeniality mines humor from the world of beauty pageants, it's an affectionate humor. This is teasing, not ridicule. In the course of the movie, Gracie makes new friends who are not as shallow and self-absorbed as she expected them to be, not to mention getting in belated touch with her own femininity.