Mary Poppins is a fun, heartfelt step back in time. In Edwardian England, Father was the undisputed master of his household, and George Banks is no exception. His children, however, do not meet his expectations. So, when their nanny quits, he chooses the children's new nanny himself. But no one is sure that she quite fits the bill -- except the children. Can Mary Poppins prove her worth to George Banks before he sacks her, and can she restore unity to the family by helping the Mr. Banks win his children's love and respect? Watch the family movie and find out.

Jane and Michael are two very mischievous children, and they have run off six nannies in four months. Part of the problem is, doubtless, their uninvolved parents: their mother Winifred (Glynis Johns) is preoccupied with her work for women's suffrage, and their father George (David Tomlinson) is distant and absorbed in his own affairs.

When the children run away from Katie Nanna for the fourth time in one week, it's the last straw -- she quits. Considering the problems they have had with nannies hired by Winifred, George decides to hire the next nanny himself. An assortment of exceedingly grim-looking nannies queue up to interview, but the most extraordinary thing happens -- a tremendous wind blows them all away, and a lovely, cheerful woman drifts down onto the front walk. She breezes in and takes charge, practically hiring herself. George is quite overwhelmed by her, and the children are entranced.

From the beginning, life with the new nanny (Julie Andrews) seems certain to be interesting. She slides up the bannister to the nursery, and from her prefectly normal carpetbag, she pulls the most astonishing array of items. She then teaches the children to tidy the nursery...and it seems to go like magic. Then she takes them for a walk in the park, where they meet Bert (Dick van Dyke). At Bert's instigation, Poppins takes the children on an adventure in a chalk drawing, where they ride carousel horses in a fox hunt, learn a wonderful new word ("supercalifragilisticexpialidocious"), and have an immensely good time. But when the rain sends them home, the children are puzzled to find that the nanny acts as if nothing unusual has taken place. And she does the same thing after their next outing, when they end up having tea while floating in the air with Uncle Albert (Ed Wynn), who has laughed himself into the peculiar floating state.

Disturbed to hear his children prattle on about popping into chalk pavement pictures and having tea-parties on the ceiling, Mr. Banks prepares to dismiss yet another nanny. Mary skillfully changes the topic, and Mr. Banks ends up agreeing to take the children with him to his workplace the next day. All would have been well if it weren't for the tuppence. Michael has a tuppence, and he wants to buy food for the birds with it. But his father, a banker, finds this a frivolous waste of money. When he and the partners in the bank gang up on the children to tell them about the value of investing their money with the bank, and the chairman of the bank snatches the tuppence from Michael, Michael's indignant shouts cause a panic, and a run on the bank ensues. Jane and Michael, in terror, run away, and it's only running into Bert that stops them. 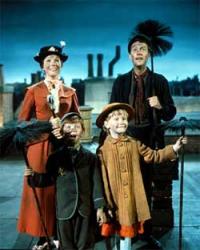 While taking the children home, Bert tries to show the children that they misunderstand their father and the pressures that his responsibilities bring to bear upon him. When they arrive at the Banks's home, Winifred cajoles Bert, who is now working as a chimney-sweep, into staying with the children until Mary Poppins returns from her day out. While Bert is cleaning the chimney, Mary comes in and calls out a warning to the children, who are staring up the chimney. Just as she speaks, Michael is sucked up the flue. Shortly thereafter, Jane follows him. When Bert and the nanny follow to bring them back, a wonderful rooftop dance ensues, and the result is that all of the sweeps of London end up in the Banks's parlor. Mr. Banks returns home to a great hullaballoo and banishes the children to the nursery in a fit of temper.

Shortly thereafter, the bank calls, and Mr. Banks is told that he must come down at once. When he arrives, he is mercilessly sacked. Temporarily unhinged by the stress, Mr. Banks quite uncharacteristically tells a joke and leaves. His joke amuses the chairman of the bank to no end, and he laughs himself into the same floating state that Uncle Albert enjoyed.

The next morning, Mr. Banks is missing, and the house is in an uproar, except in the nursery, where the despondent children are watching their beloved nanny pack. While they are begging her to stay, Mr. Banks comes home, singing loudly. It seems that his being sacked has finally awakened him to what is truly important in life. Mary Poppins sees that her work with the Banks family is done, and she rises lightly on the changed winds, as Mr. Banks takes his family to the park to fly a kite.

Among this film's many awards and nominations are