Madagascar tells what would happen if a bunch of animals raised in captivity were suddenly released into the wild, required to fend for themselves, find their own food, and cope with the vagaries of nature. This animated family movie tells the story of the animals and the unexpected results they encounter.

Madagascar begins by introducing Marty. Marty the Zebra is ten years old, and he's lived in the New York Zoo all of his life. He's a little depressed about never having been to the wild. And then the penguins show up in his enclosure, as they try to escape to Antarctica. It gives Marty the idea of trying to get out of the zoo for a while to see the rest of the world. So when he blows out the candles on his birthday cake, that's what he wishes -- that he could go to the wild. His friends, Alex the Lion, Melman the Giraffe, and Gloria the Hippo, think he's nuts. Alex tries to talk Marty out of his depression, but he only succeeds in irritating Marty.

After everyone goes to bed that night, Marty heads for Grand Central Station, where he hopes to catch a train for Connecticut and visit "the wild" for a few hours before returning to the zoo. But when the hypochondriac Melman wakes up and finds Marty gone, he rouses the others and they all go after him to save him. When a zebra, lion, hippo, giraffe, four penguins, and two monkeys show up in Grand Central Station, mayhem ensues. The humans assume that the animals tried to escape, and the animal-rights activists insist that the animals be sent to a wildlife preserve in Kenya.

The animals are drugged and put on a cargo ship for the trip to Kenya. But the humans haven't counted on the ingenuity of the penguins ... and the penguins get out of their crates and hijack the ship. Marty and Alex get in a fight that breaks the ropes securing their crates, so that when the penguins abruptly change the ship's direction, the crates fall into the ocean. Marty, Alex, Gloria, and Melman fall overboard and are shipwrecked on an island. They don't know where they are, but the lemurs give the location away -- they are in Madagascar. Marty's gotten his wish, for they are definitely in the wild now.

Alex Does Not Adjust Well 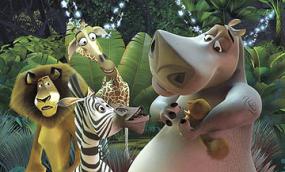 When the four friends are reunited, their joy is quickly overwhelmed by Alex's rage. He was the star of the New York City Zoo, and he is not pleased at being "transferred" to another zoo. Melman thinks they are in San Diego, and the animals head for the zoo office to clear up the confusion so they can go back to New York. They hear music with a heavy beat, and they head for it ... only to run smack into a lemur dance celebration. Alex finds all of the nature a bit overwhelming, and he reels into the dance just as the foosas are menacing a baby lemur. Thinking that Alex has saved the baby, the king of the lemurs, King Julian overrides the other lemurs and insists that "the New York Giants" be allowed to stay. But when Julian lets slip that they are now in the wild, Alex cracks, and they all return to the beach.

When Marty is ecstatic over being in the wild, Alex divides the beach into two parts: one for Marty and one for the others. Marty starts setting up shelter and arranging food; Alex and the others erect a huge bonfire to try to get rescued. It doesn't work, and Alex loses it. Gloria and Melman join Marty in his fancy shelter while Alex sulks on the beach. But Alex finally comes around and joins the group, and the lemurs try to make friends with them so that they will be forever protected from the foosas.

Things seem to be going well, but while romping with Marty one day, Alex suddenly finds instinct taking over, and he tries to eat Marty. After this happens a couple of times, Alex goes into exile on the foosa side of the island.

The penguins, meanwhile, have made it to Antarctica, been thoroughly unimpressed, and returned in search of a more hospitable climate. Gloria, Melman, and Marty flag down the ship and the penguins agree to help them. But Marty runs off without the others to get Alex. While he's trying to convince Alex to return to the beach, the foosas attack him. Alex, the lemurs, and Gloria, Melman, and the penguins all come together to save Marty and help Alex.

Madagascar is a great family movie that your children will watch again and again, making it a definite must for your DVD collection.