The blonde bimbo who turns out to be not as dumb as she seems is a Hollywood comedy tradition going back to the birth of the talkies. In Legally Blonde, the tradition is back, as fun as it ever was.

California college student Elle Woods (Reese Witherspoon) has it all. Rich and indulgent parents, sweet and supportive sorority sisters, and a dreamboat steady guy. She's majoring in what's really important (Fashion!), and is preparing for the most important night of her life. Her boyfriend Warner Huntington III (Matthew Davis) has asked her out to dinner to discuss something important, and Elle knows what that means; he's going to propose.

But Elle's pink and fluffy world comes crashing down around her when Warner reveals his true intent. He's dumping her. Warner, from East Coast money, is aiming for the US Senate by way of Harvard Law School, and Elle just doesn't fit his image of a Senator's wife. He thinks it's time for him to 'get serious'. It's been fun, but so long. 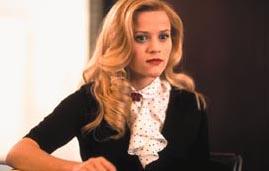 Elle is crushed. But then her fighting spirit is aroused. She'll show Warner she can be serious. (Well, serious according to his definition - what could be more serious than Fashion?) She'll get admitted to Harvard Law herself and win him back.

The first part of her plan goes well; she does indeed get admitted to Harvard Law. (One wonders how many other fashion majors have ever applied!) And it's not just the perfumed resume and the videotaped admissions application, Elle studies hard for her LSATs and does well on them.

A Fish Out Of Water

At her California sorority, Elle fits right in. But in Harvard Law School, she might as well be from Mars. The bastion of East Coast money and conservatism is stunned by the arrival of this vision in pink, with her little Chihuahua Bruiser (Moonie) in a tote bag.

And here's where things stop going according to plan. Poor Elle is an outcast among the intense denizens of Harvard Law. She meets Warner, but turns out he's gotten back together with his prep school girlfriend, the serious and decidedly non-blonde Vivian Kensington (Selma Blair).

(Best dialog, and best put-down of a young man who thinks he's something special based on his law school admission - Warner: "You got into Harvard Law?!" Elle: "What? Like it's hard?")

Elle's instructors and fellow students don't take her seriously. But she buckles down and really works at her classes, and remember, just because she's frivolous doesn't mean she's stupid.

An Internship and a Murder Trial

Elle gains the attention of Professor Callahan (Victor Garber) and becomes one of the four students chosen for a prestigious internship with Callahan's law practice.

Callahan is defending Brooke Taylor Windham (Ali Larter), the 26 year old fitness mogul accused of killing her 60ish husband. The interns are expected to do the donkey work, but Elle comes at the case from a refreshing angle. Unlike everyone else, she believes Brooke is innocent and she aims to prove it.

Can Elle use her fashion knowledge to solve a high-powered murder case? In the world of comedy movies, of course she can.

Legally Blonde was directed by Robert Luketic and written by Karen McCullah Lutz & Kirsten Smith, based on the novel by Amanda Brown.