Unless you are a devoted fan, you may want to skip Land of the Dead, George A. Romero seems to be on a bit of a cycle. Every ten to fifteen years or so, he unleashes upon the world another "of the Dead" horror movie. This can be seen as either a good or bad thing, depending on your point of view. The latest of Romero's forays into the world overrun by flesh-eating ghouls or zombies (they're affectionately called "stenches" in this outing) is the unfortunately lackluster Land of the Dead.

Reviewing Land Of The Dead

I want to make one thing perfectly clear. I love Romero's work. From the original Night of the Living Dead to the bizarre yet intriguing Martin, Romero knows how to touch a chord with his audiences, and the films he creates become about much more than the gross-out special effects for which they're famous. They're horror films, to be sure, but they're on a completely different level than something like Friday the 13th or A Nightmare on Elm Street, which is why Land is something of a let down. The flick would be a perfectly enjoyable B-movie for watching on video were it made by some new schlock director, but knowing that it's a true Romero entry into the series makes it a disappointment. 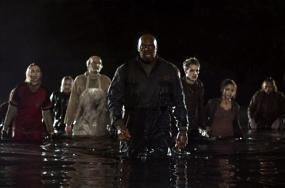 The plot centers around a civilization of humans (the last ones on Earth? - maybe, the film never makes that claim) living within a walled city. The well-to-do live in an expansive (and expensive - apparently despite there being roughly ten zombies to every human, the economy hasn't collapsed) skyscraper while the common folk scramble in the streets for food, shelter, and medicine. The evil Mr. Kaufman (played sleepily by Dennis Hopper, you just know he's evil - for him it's all about MONEY) controls all of the goings on in town, including the sending of raiding parties into nearby deserted rural towns for needed supplies and the occasional feeding of political dissidents to the stenches. When one of Kaufman's flunkies (Cholo - played very well by John Leguizamo) decides he wants to move upstairs with the big boys and finds out that he's not their type, all hell literally breaks loose.

Land Of The... Learning?

The real issue with Land lies with its titular Dead. Over the course of his films in the series, Romero has shown a small degree of Zombie evolution each time. The walking eating machines of Night gave way to the humorous shopping mall flailing of the ghouls in Dawn, which led to the antics of Bub, a zombie trained to do parlor tricks in 1985's Day of the Dead. Now the zombies have learned to rally together and even fire automatic weapons (sure, Day had Bub shooting a pistol at the Evil Army Captain, but the effect there was suitably humorous while here it's just silly) at the defending soldiers.

Simon Baker (The Ring Two, Book of Love) and Asia Argento (xXx) round out Romero's cast. Argento doubtlessly appears mostly because of her last name (famed Italian horror director Dario Argento is her pop), but looks pretty good in her fishnet bodysuit bad girl outfit. The inclusion of names as big as Hopper and Leguizamo is perhaps most surprising for Romero, who usually works with unknowns in his zombie flicks. Romero has directed stars before, most notably in his films based on Stephen King works (he directed King himself in the still fun to watch Creepshow, Timothy Hutton in The Dark Half, and is slated to work with Laura Dern in The Girl who Loved Tom Gordon which is currently in pre-production, according to IMDB).

Land Of The Verdict

Land of the Dead is watchable, but the zombie formula doesn't work anymore. Night of the Living Dead shocked and horrified audiences in 1968 with its horrid scenes of cannibalism and violence, but that was almost forty years ago and before the world had Resident Evil (Capcom's game series owes a lot to Romero, by the way), The Zombie Survival Guide (an actual book that tells you what to do in case of a zombie attack, no joke), and the splatter film explosion of the early eighties. Zombies just aren't very scary anymore, and when Romero starts messing with the formula to make them less scary (you'd think he'd have learned from the 2004 remake of Dawn which gave use fast moving, roaring zombies in an effort to make them scarier but wound up looking like less frightening versions of the infected from 28 Days Later), he alienates his audience even further.

There are bits of Land that are enjoyable, but if I want to laugh at the shenanigans of the undead, I'll rent the superbly made spoof Shaun of the Dead instead. One small bit of solace for diehard fans of Romero's Dead films is that, at the rate he releases them, he'll be in his eighties or gone to the Great Screening Room in the Sky by the time the next entry is due.