John Wayne westerns are a popular collector's item. How, though, did the westerns come to be?

There are times when what would seem to be a very minor event of no consequence turns out to be something far greater. In this case, it was an actor wanting to get tickets to University of Southern California football games. He befriends a player, even going so far as to offer the player summer employment on movie sets. Were this to happen today, this scenerio would lead to scandal, NCAA violations, and national headlines. But this is not a modern story. This is the story of how John Wayne westerns became a reality.

The actor was Tom Mix, one of the most influential western actors of the silent era, and the young football player was a tall, muscular young man named Marion Morrison. Morrison soon began to work full time on movies as an extra and in bit parts. He became friends with a young director, John Ford, and over time would star in hundreds of films, many of them westerns. Morrison would act under a number of film names, including Michael Morris and Duke Morrison. But in the 1930 big screen western The Big Trail, director Raoul Walsh decided Marion Morrison was not the right name for an actor starring in western roles. He decided the young actor from Winterset, Iowa, should go by the name John Wayne. Thus, the first of many John Wayne westerns was born.

John Wayne starred in over 200 films during a career that spanned 50 years. The movies we most identify with Wayne are the westerns, those signature films of right and wrong, of vast desert landscapes, of cavalry charges and cattle drives. Wayne starred in his share, and many of them are now regarded as classics of the genre. It was the right time and the right place for Wayne, growing up in Southern California in the 1920s. The Old West may have been gone but not in Hollywood. Westerns were very popular during the time, and the demand attracted many of the cowboys and lawmen from the earlier days to work as extras or consultants. One of them, introduced to Wayne by his friend Mix, was a lawman of some fame, and their conversations are what gave Wayne the mold for the lawmen he would play during his long career. In an "only in Hollywood" moment, the greatest western actor learned his craft from the most notorious western lawman - Wyatt Earp.

It was the "B" western that gave Wayne his start on the screen. He appeared in dozens of such films until his friend John Ford gave him his big break, as The Ringo Kid in Stagecoach, generally considered one of the greatest westerns of all time. The movie won two Oscars® and was nominated for five other awards. It also launched Wayne's career as an "A" list actor. At 32, when the movie was made, Wayne had already appeared in 80 movies, and his inclusion in the Stagecoach cast was over the strong objection of its producer, who felt that Wayne's B movie credits would doom the film. John Ford won the argument, and the movie was a critical and financial success.

It was also Ford's first talking western, and the first western he had directed in 13 years. Western movies had fallen by the wayside during the early years of "talkies" because of the difficulty in recording quality sound on location. In the case of Stagecoach and a number of other Ford/Wayne collaborations, this location would be the expansive and beautiful Monument Valley along the Arizona-Utah border. Its long vistas and distinctive geologic formations would form the backdrop for a number of classic John Wayne westerns.

Nominated for two Oscars®, Wayne's next classic western was Red River, directed by the legendary Howard Hawks. It is difficult to decide whether Wayne or Texas is the bigger icon in western movies, but many westerns - regardless of where they were filmed - take up the issues of the development of Texas after the Mexican War and the many confrontations that occurred over the decades along the Rio Grande River. In this case, the quest is the first great cattle drive after the Civil War, when the economy of the South is destroyed and a new outlet for Texas beef has to be found. Wayne is the star. An actor in his first major role, Montgomery Clift, plays his adopted son, and the movie is largely about the alienation and reconciliation of these two characters. Red River also demonstrates the lack of credibility this genre is afforded. While it received its share of critical acclaim and was a success at the box office, many felt the performances both by Wayne and Clift were Oscar® worthy. Neither were nominated.

Bring on the Cavalry

Red River was not the only significant John Wayne western released in 1948. The other was the first of the John Ford's so-called "cavalry trilogy", Fort Apache. Fort Apache was one of several films shot in the west, and Wayne starred as a cavalry officer fighting the Apache. The film, co-starring Henry Fonda, garnered Ford a Best Director Oscar®. The film is reminiscent of Custer's last stand with Fonda as the commander who views subjugating the Apache as a path to honor, glory, and promotions, while John Wayne is the veteran who understands and respects Cochise. At the end of the movie, only Cochise and Wayne are left standing. 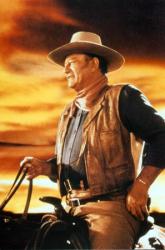 The other two movies in the trilogy were She Wore a Yellow Ribbon and Rio Grande. In She Wore a Yellow Ribbon, Wayne plays a cavalry commander on the eve of retirement. There are the obligatory confrontations, in this case with Arapahos, but the movie is more focused on the soldier's life in the frontier and how a career officer (Wayne) painfully leaves the only life he has known. This movie won an Oscar® for best cinematography. Winston Hoch, who shot the film, would team up with John Ford to direct two other Wayne classics, The Quiet Man and The Searchers.

Rio Grande, the third of the Ford trilogy, was also the least critically acclaimed. In it, Wayne plays the same character as he did in Fort Apache. It is also his first pairing with Maureen O'Hara, with whom he made five movies. Wayne and O'Hara would be lifelong friends and their chemistry in each of their movies was a winner at the box office. Rio Grande is considered by many to be the best of the three Ford movies, showing the harshness of the west, the harshness of the cavalry life, and the still open wounds from the Civil War that had just come to its conclusion.

In 1956, at age 49, Wayne starred in one more Ford epic, The Searchers. This complex character drama is not the stereotypical western or John Wayne western. Panned at the time, it is now considered by many to be the greatest western of all time. Wayne's character is so filled with hatred and racism that it is hard to distinguish between him and the Commanche he so doggedly pursues.

John Wayne is identified with the western, and the western with John Wayne. Over the years, Wayne made many films in this genre, many commercially successful but not terribly noteworthy. Most great actors have appeared in westerns, and yet the genre, like its most iconographic actor, John Wayne, still remains on the "B" list. Yet, it was Steven Spielberg who said, "(b)efore I go off and direct a movie I always look at four films. They tend to be: Seven Samurai, Lawrence of Arabia, It's A Wonderful Life, and The Searchers." Not bad company.

Want to learn more about The Duke? His life and films are well chronicled at such sites as John Wayne Place, Reel Classics and Internet Movie Database. Trivia fans may also be intrigued to learn that the character of Indiana Jones wasn't the first to take his nickname from that of a dog. "Duke" was the name of the Wayne family's beloved Airedale.