1996's Independence Day is not the place to go for deep intricate plotting, moral ambiguity, or intense character development. This is a romp, a fun action-adventure to gasp and cheer at. You certainly don't have to bother feeling sorry for the aliens, because they're bad clean through. Why are they here and what do they want from us? They're remorseless scavengers and they want us all dead.

The story opens with the approach of a gigantic spacecraft, one quarter the size of the moon. The craft parks behind the moon and sends out a number of smaller saucer-shaped craft. Smaller is a relative term - these craft are 13 miles across and take positions directly over every major city in the United States.

"What Do They Want?"

The public remains commendably calm about the event. The aliens, after all, have made no hostile moves. In Washington, young president and former fighter pilot Thomas Whitmore (Bill Pullman) urges calm and the government sets about trying to contact the aliens. 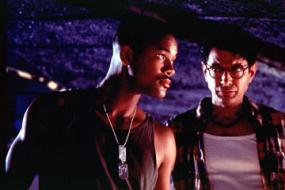 Meanwhile, up in New York City, a technician for the cable television company David Levinson (Jeff Goldblum) is dealing with the static caused by alien interference with the satellite feed. Out in the western desert, alcoholic cropduster Russell Casse (Randy Quaid) is immediately suspicious; when he's had a few, he'll tell anyone who will listen about the time he was abducted by aliens. He knows darn well they're up to no good. And in the Los Angeles suburbs, Air Force pilot Captain Steve Hiller (Will Smith) is just peeved; the arrival of the aliens cancelled his holiday weekend with his exotic dancer girlfriend Jasmine (Vivica A. Fox).

David analyzes the static pattern and realizes that the aliens are counting down to an attack within hours. He could just head for the hills with his amusingly cranky father Julius (Judd Hirsch). The catch, though, is that David is still in love with his ex-wife Connie (Margaret Colin) an ambitious career woman who left him for her career and is currently a presidential adviser. So David and Julius head to Washington, trying to get Connie away from the city before the attack.

Connie won't leave, though, so David has to convince President Whitmore that the attack is imminent. He succeeds in doing so, and Air Force One takes off in the nick of time, with the huge fireball of the alien attack licking its tail.

NOW What Do We Do?

Special effects show us the devastating attacks on New York, Los Angeles, and Washington. The alien technology is vastly superior to our own - even nuclear missles just explode harmlessly against the shielding of the alien ships.

Up in the air, the party aboard Air Force One, which now includes David and his dad, are at a loss as to how to proceed. Cranky old Julius takes them to task. Why, he asks, weren't they ready for this? For decades now, they've had that spacecraft that crashed at Roswell, so why didn't we prepare a defense? President Whitmore tells Julius that the tabloids are wrong, the US has no alien spacecraft. Well..... His national security advisors tell him that's not entirely accurate...

Sure enough. Turns out there is an Area 51, there is a crashed spaceship (of the same type that is currently attacking us!), there are alien corpses in the deep freeze - so Air Force One heads out to Area 51, to plan the counterattack.

The plan that they eventually come up with involves David and Captain Hiller flying the alien craft to dock with the mothership and take down the shields, while earth's counterstrike against the large saucer ships is led by the President himself.