An Ice Age has hit, and all of the animals are migrating south to gain safety from the biting cold and the dearth of food. All, that is except Manny the Mammoth, who is resolutely heading north. Sid the Sloth, too, is marooned in the frozen north, as his family has left him behind. And then a desperate mother human hands her baby to Manny just before she is washed down the river. Will Manny leave the baby to die, or will he return it to the human encampment? And why is he being stalked by Diego, the sabre-toothed tiger? Ice Age is a family movie that explores the dynamics of herd life as well as the psychology of the individual, teaching valuable lessons of teamwork, acceptance of others' differences, and the importance of confronting the past in order to heal the future.

All of the animals are trekking south. All of them, that is, except Manfred Mammoth, who is bucking the traffic flow and walking in the completely opposite direction. The fact that an ice age has engulfed the planet seems to bother Manny very little. He's actually rather truculent when confronted about his nonconformity.

Sid the Sloth, too, is not headed south. But that's not his own doing. His family has left him behind -- and we begin to find out why as Sid interacts with the animals that remain in his part of the world. He infuriates two rhinoceri to the point that they decide to kill him. But he runs into Manny in his desperate flight, and Manny, disgusted by the rhinos' desire to kill for the sake of killing, saves Sid's life. And that act makes Sid determined to stick to Manny, no matter what.

A pack of sabre-toothed tigers has attacked the human village in an attempt to capture a succulent baby human. The baby's mother flees with her child in her arms, but she is suddenly confronted by a cliff and a waterfall. Hard pressed by the tigers, she leaps over the cliff and lands in the river far below. 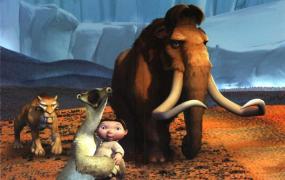 Manny and Sid happen to be walking by the riverside, with Manny still trying to disentangle himself from Sid's attentions. They catch sight of the mother, thrusting her child toward them from the water. Manny, half-thinking, reaches to take the baby, but when he looks back to the river, the mother is gone. Manny sets the baby down on the ice-pack and begins to walk away. The horrified Sid snatches up the baby and runs after Manny, insisting that they must return the child to the humans. Manny shocks Sid by asking why, when it would just be another human to hunt animals down and kill them in cold blood.

Sid threatens to take the child to the humans himself, and Manny is perfectly willing for him to do so. But as Sid tries to climb a cliff with the child, he is attacked by a sabre-toothed tiger who tries to take the child, insisting that it belongs to him. Suspicious, Manny decides to escort Sid to the human encampment, but when they reach the human camp, they find that the humans have abandoned it to move further north. When Diego, the tiger, appears again, Manny decides that they must follow the humans to Glacier Pass in order to return the child to its herd. He insists that Deigo accompany them, ostensibly as their guide, but actually just so he can keep an eye on Diego.

A Trek Through the Ice Age

Adventure after adventure befalls the ill-assorted group, which Sid has decided to call their "herd." While trying to find food to feed the baby, the group runs into some seriously psycho Dodos. These birds are fanatical like neo-Nazis, but they are also phenomenally stupid. After the encounter, there's no doubt why the Dodos became extinct. They run back into the rhinos who want to kill Sid, and Diego saves him.

It's when they are trying to get out of an ice-cave that they come across some cave drawings that profoundly affect Manny. It's the first hint about why Manny is so misanthropic, as it depicts a mammoth-hunt, with a dead mother and calf. After they escape the cave, they are caught in a volcanic upheaval, and Manny saves Diego from falling to a river of boiling lava, nearly losing his own life in the attempt. When Diego asks why, Manny replies, "That's what you do in a herd. You look out for each other."

Unbeknownst to Manny and Sid, Diego is leading them into an ambush. His pack of tigers is waiting at Glacier Pass to kill the mammoth and the baby. But when the time comes to betray his "herd" to the tiger pack, Diego cannot do it. He reveals the planned ambush to Manny and Sid, and then fights viciously to save Manny and the baby. When it's over, Diego is dead but so are all of the other tigers. Manny and Sid are now free of interference as they finally return the baby to the humans.

There's just one complication. Humans hunt and kill mammoths. The baby's father has lagged behind, trying to come to terms with his grief over the loss of his wife and child. He is stunned to be confronted by the mammoth and threatens Manny with his spear. Manny takes it and throws it away, but the delay has allowed the humans' pack of hunting dogs to scent the mammoth. Manny has shown the father what he is carrying, and the father stops the hunt just in time. As he is joyfully showing his child to the other humans, Manny and Sid turn to leave. At that moment, Diego comes limping over the hill and is joyfully reunited with his "herd."