Gremlins 2: The New Batch has all of the humor and chaos of the original -- and then some.

Gremlins Goes To The Big City

1984's Gremlins, about a band of nasty beasties running amok in small town America, ended with the old Chinaman (Keye Luke) taking back Gizmo, the cute little furry creature that spawned the monsters.

As Gremlins 2: The New Batch, released in 1990, opens, Gizmo is back in New York's Chinatown in the quaint old shop. But old men eventually die, and that's what happens to Gizmo's owner. Escaping the shop one step ahead of the wrecking ball, poor little Gizmo is lost on the streets of New York, and soon snatched up and taken to a genetic research lab run by the evil Dr. Catheter (Christopher Lee, spoofing his own past as King of the Horror B's). 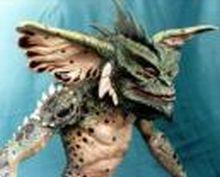 Fortunately for Gizmo, the lab is located in Clamp Tower, the soaring monument to wretched excess built by real estate and media mogul Daniel Clamp (John Glover, who later played the Devil in TV's Brimstone and evil mogul Lionel Luthor in TV's Smallville).

Anyone who doesn't recognize who Clamp is parodying? - "You're fired!"

It's fortunate because Billy Peltzer (Zach Galligan), last seen as a small town bank teller and Gizmo's previous owner, has moved to the big city and now works for the Clamp company as a tiny cog in the PR department. Billy's girlfriend Kate (Phoebe Cates) has made the big move as well, working as a Clamp Tower tour guide and wearing the stupidest hat ever inflicted on a powerless employee.

The Rescue, and That Water Thing

Billy finds Gizmo, recognizing his signature trilling song, and steals him from the lab. He intends to take Gizmo home to safety, but one thing leads to another, and before you know it, Gizmo gets wet.

Fans of Gremlins know what happens next in Gremlins 2 - a bunch of little furry pellets pop off and develop into gremlins, starting off furry and destructive, and then cocooning and coming out larger, reptilian, and even more destructive.

This time they have an entire giant office building to rampage through.

Officious martinet building security chief Forster (Robert Picardo) naturally refuses to believe Billy's insistence that the building must be evacuated, and soon it's too late and the gremlins are running amok.

What follows is exuberant anarchy, as the gremlins wreak havoc throughout the various tenants of Clamp Tower. And remember, there's a genetics lab available.

The gremlins break into the lab and quaff from various vials, giving us a flying gremlin, a spider gremlin, and best of all, a 'brain' gremlin. This fellow samples the brain vial and emerges from the experience with scholarly-looking glasses, a pipe, and voice by Tony Randall at his snootiest.

And where is Gizmo while all this is going on? The little television addict takes the advice of Rambo - "To survive war, you have to become war."

Gremlins 2: The New Batch is directed by Joe Dante and written by Charles S. Haas, based on characters created by Chris Columbus.