Let's get one thing straight right away. Sam Raimi's Evil Dead is a bad movie. It is the kind of movie that is so bad it can actually spread its badness to other movies which sit next to it on the shelves at Blockbuster Video in much the same way a moldy slice of pumpernickel will eventually turn the whole loaf green. It is so bad that, were stinkers like The Dukes of Hazard and Hope Floats able to talk, they would say "Wow... that movie is really bad." Suffice to say that Evil Dead is terrible. Now, if you haven't seen it, run - don't walk - to the nearest video store, rent it, and watch the hell out of it.

Evil Dead - So Bad It's Good

Sam Raimi may not have invented camp in horror films (that honor has to go to Edward D. Wood, Jr., acuter of such classics as Plan 9 From Outer Space and Orgy of the Damned), but he certainly perfected it. While Evil Dead was not his first film (he made It's Murder, Within the Woods, and Clockwork in 1977 and 1978), it is the one that put him on Hollywood's radar. The movie is low budget schlock horror from frame one to the very end, but it is Raimi's bizarre camera angles, wry humor, and dark wit that makes it worth sitting through and which eventually made some film mogul say "You know that multi-million dollar superhero movie that people have been waiting decades to see? Let's give it to the guy who did Darkman." 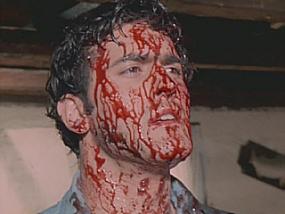 Evil Dead introduces the character of Ash (Bruce Campbell), one of five people spending the weekend in a dilapidated woodland cabin. As the group investigates the area, they discover an ancient grimoire, which happens to be the fabled Necronomicon ex Mortis or "Book of the Dead" and an old reel-to-reel tape machine. When the tape is played, it has translated passages from the book, and the ancient words awaken a far more ancient evil in the forest. Several buckets of blood, some tasty dismemberments, and a scene in which a young woman is raped by a tree follow. Good times.

As the evil forces in the forest take out the young people one by one, turning them into demonic creatures that attack their friends, Ash alone realizes that he must silence the evil forever. Soon he is the last one left and must battle the "Deadites" by himself as he struggles to survive until morning and defeat the Evil Dead. Of course, we know what kind of a job he did. There are, after all, two more movies in the series; Evil Dead 2 and Army of Darkness.

Sam Raimi And Bruce Campbell vs. The Evil Dead

Evil Dead is a landmark film in much the same way that Peter Jackson's Dead Alive is a landmark film. Both were incredibly bad and played more for the laughs of the filmmakers than anything else. Both were made by directors who went on to great acclaim (Raimi with Spiderman and Jackson with the Lord of the Rings series) despite these early efforts. Both went on to achieve cult status.

Raimi's movie did one thing that Jackson's did not, however. It produced a star in a young actor named Bruce Campbell. Campbell is now best known for the role of Ash and has managed to build his career on playing characters patterned after him. When Campbell was starring in The Adventures of Briscoe County Junior on television, he was essentially Ash in the old west. When he was playing his recurring role on the Raimi-produced Xena: Warrior Princess, he was Ash in an ancient Greece, which looked more like medieval England. This is not to say that Campbell lacks range as an actor but merely that he has become identified with the character, in much the same way that Mark Hamil will always be identified with Luke Skywalker, no matter what other role he takes.

The good thing is that Campbell revels in it and wouldn't have it any other way. Campbell loves playing Ash as much as Raimi seems to love writing and directing him. As such, he has returned to the role twice in the movies (three times if you count the currently in pre-production Evil Dead, a 2006 remake being helmed by Raimi) and several more times in the world of video games. Like the Deadites he struggles against, Ash just keeps coming back for more. Despite these humble beginnings, Campbell is now a recognized name in Hollywood, and Raimi is one of the top directors working today. It's not a bad place to be when your first movie to get noticed is possibly one of the worst movies ever made.