2003's family comedy Elf has a whimsical premise, but it is perhaps too lightweight to carry a feature-length movie. A human adopted by North Pole elves as a baby comes to New York City in search of his real father. The six-foot-something Ferrell is an elf. 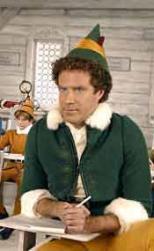 Thirty years ago, a human orphan crawled into Santa's bag on Christmas Eve and wound up at the North Pole. He grows up to be Buddy (Will Ferrell), raised by Papa Elf (Bob Newhart), twice as tall as his fellow elves, but unaware that he is human until he overhears some other elves discussing his inability to keep up with the toy production quota.

Of course, Santa (Ed Asner in some inspired casting) knows everything, and tells Buddy that his mother is dead, but his real father is alive and living in New York. Oh, and Dad Walter (James Caan) is on the Naughty List.

Buddy sets out for New York to find his father. And it's the character of Walter that is the weakest point in the movie. Caan does his best, but the script doesn't give him a lot to work with.

We're told that Walter neglects his family because he's so wrapped up in his work, but at the same time, we see Walter so indifferent to his work at a publishing house that he allows the shipment of a book with the crucial final pages blank. He doesn't want to incur the expense of a reprint, but later we see his initials on the blank pages in galley proof, so it's apparent that this 'work-obsessed' man is not paying any more attention at the office than he is at home. Walter is just a generic grouch.

Of course, this is happening during Christmas season, so a man can walk the streets in an elf costume without being committed for observation. In fact, when Buddy shows up at his dad's office, he's assumed to be a singing elf-gram. When he tells Walter he's his long-lost son, raised by elves, he's given the bum's rush.

Elf in the Big City

Buddy finds his way to Gimbel's, where he is mistaken for an employee. There he is enchanted by Jovey (Zooey Deschanel), a woman in an elf costume, but without the elfin manic good cheer. Jovey is put off by Buddy but gradually warms to his childlike nature.

After a ruckus caused by Buddy's outrage at Gimbel's Santa "imposter", Dad bails Buddy out of jail. He takes Buddy to a doctor for blood tests, which confirm that Buddy is indeed his son. So he takes Buddy home to his long-suffering wife, Emily (Mary Steenburgen), and his neglected son, Michael (Daniel Tay).

All the hardened New Yorkers are eventually enchanted by Buddy - it's that Childlike Sensa Wondah. Jovey gets into the spirit. When Buddy's idea of a date is to play in the revolving doors and check out all the great Christmas trees, she takes him to the biggy at Rockefeller Center. Michael is impressed by Buddy's snowball fighting prowess.

Dad is the last holdout, but you know he's going to sing a Christmas carol before the closing credits.

Kids will no doubt be enchanted by Elf and want to see it again and again. Adults will find it moderately enjoyable once, but most of them will start to notice that every gag, from the revolving doors to Buddy putting syrup on everything, is told at least twice.

Elf was directed by Jon Favreau and written by David Berenbaum.