For decades, movies have portrayed the encounter between humans and aliens from outer space as bad news for humanity. But in 1982's ET: The Extra-Terrestrial, Director Steven Spielberg gave us the flip side; a little lost alien stranded on Earth, menaced by the big spooky humans.

An alien ship lands on Earth at night. The visitors are explorers. One seems to be a botanist; we see him taking plant samples. He is attracted by the lights of a nearby city and strays too far from the ship. When the indigenous life forms (that's us) approach, the ship takes off. Too far to make the recall, our little alien hero watches in dismay as the ship takes off without him.

His dismay is obvious, which says a lot about the design of the alien, a very inhuman creature that stands about 3-feet tall, with leathery skin, stubby legs, an extendable neck, and a wide, flat, big-eyed head. Totally alien - and yet undeniably cute and very expressive.

In an average subdivision of an average suburb, single mom Mary (Dee Wallace) is raising her three spunky kids. Middle child, Elliott (Henry Thomas), hears something moving in the garden shed and is determined to lure it out. 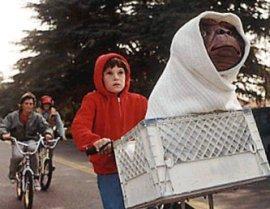 He knows what he would find irresistible and sets out a line of candy for bait (Reese's Pieces, in the most effective product placement of all time). Something follows that trail of candy, and Elliott and the alien meet. After their initial alarm, the two quickly decide the other is no threat.

What's Elliott's reaction to meeting an alien from another world? He's a kid, it's a stray, and it showed up in his back yard - of course he wants to keep it. So Elliott takes the alien inside and names it "ET".

Elliott succeeds in hiding ET from Mom, but eventually he has to let older brother, Michael (Robert MacNaughton), and little sister, Gertie (Drew Barrymore), in on the secret.

Learning About One Another

While ET and Elliott are quickly the best of friends and connect on an emotional level, we really never learn much about ET himself: who he is, what he's doing here, where he's from. Much of the film deals with ET learning about us, exploring the house while Mom is at work and the kids are at school, learning what's inside the refrigerator and what's on television. The kids even take ET out trick or treating on Halloween.

As much fun as it is for the kids to have an alien pet, ET is still a sentient being stranded far from home. In one of the few English phrases ET masters (learned from a television commercial), he tells them what he wants to do: "ET phone home". With the children's assistance, he builds a bizarre contraption in the woods, a device to 'phone home' and contact his ship.

The authorities know there was an alien ship landing, and they're looking for ET. In a frightening scene, the house is invaded by faceless men in environmental suits, who capture ET for study.

ET is growing weaker. We don't know whether it's the effect of captivity or something about our environment, but it's killing him. With the telepathic connection between the two of them, it's killing Elliott as well.

All is not lost. ET, both telepathic and telekinetic, knows that his message has been received, and the ship is returning for him. He just has to get to it. So it's up to a motley crew of unarmed kids on bicycles to steal what the authorities believe to be an alien corpse, elude capture, and get ET to the rendezvous.

The Impact of ET: Extra-Terrestial

A description of the plot can't begin to explain the impact ET: The Extra-Terrestrial has on audiences. This is a movie that gives viewers hope and optimism, that makes them 'cry for happy'. It's about universal friendship and love, about the triumph of hope over fear. It's about maintaining a childlike view of the universe and never losing a sense of wonder.

ET: The Extra-Terrestrial was directed by Steven Spielberg and written by Melissa Mathison. It won four Oscars for sound, visual effects, and music, and was nominated for Best Picture, Best Director, and Best Screenplay.