In the family movie Dumbo, a baby elephant learns that his greatest liability might just become his greatest asset. However, he must overcome the pain and timidity that the ridicule of the other animals in the circus has burdened him with.

Look Out for Mr. Stork

It's winter, and the circus is at its winter quarters, deep in Florida. A multitude of storks flies over, each dropping a bundle of joy on an expectant animal family. Everyone seems to have a little one ... everyone, that is, except Mrs. Jumbo. It's not until the circus breaks camp and begins its journey north for the season that the stork finally arrives with Mrs. Jumbo's precious baby. 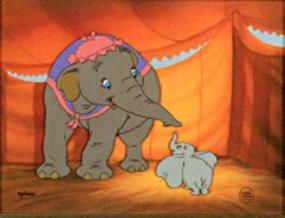 Mrs. Jumbo carefully unswaddles her baby boy and decides to name him Jumbo, Junior. But while she is showing him off to the other lady elephants, the baby sneezes and is instantly engulfed by tremendous, floppy ears. When the other elephants begin to jeer and call the baby Dumbo, Mrs. Jumbo angrily closes the partition between her enclosure and theirs, and begins to play with her son.

All is well until the exhibitions start. The children begin to make fun of Mrs. Jumbo's son, and she is distraught. When one ill-mannered child pesters the baby elephant until it cries, Mrs. Jumbo loses her temper and attacks the boy, earning herself a long sentence of solitary confinement. The poor little elephant is now alone.

Dumbo isn't alone for long, however. Timothy Mouse overhears the catty gossip of the other elephants and decides to befriend him. Sadly, Dumbo muffs his first appearance in the ring, and the ringmaster makes him a clown. Furious over the injuries they sustained when the long-eared baby literally "brought the big-top down" and disgusted by his being made a clown, the other elephants excommunicate him.

A Visit With Mom

Recognizing that Dumbo is deeply depressed and lonely, Timothy arranges for the baby elephant to see his mother. In one of the most touching scenes from all of the Disney Movies, his mother sings the beautiful lullaby Baby Mine, Don't You Cry to encourage and reassure her son. But the happiness is only temporary. The poor baby is even more downcast when they have to leave, and his crying brings on a fit of the hiccups.

Timothy gives him a drink of water, but, unfortunately, the water has had a bottle of wine spilled into it, and Dumbo gets drunk. After a long series of bizarre dreams, Dumbo sleeps peacefully until the two friends are awakened by the raucous laughter of a flock of crows. The crows are surprised to find an elephant and a mouse sleeping in their tree. At first, Timothy doesn't believe them, but then he looks down. When he wakes up his long-eared friend, the shock of discovering where he is causes Dumbo to fall. Once they pick themselves up, they start to leave, with Timothy mulling over the problem of how they got up in that tree. Finally, it hits him. With his big ears, they must have flown. The crows find this immensely amusing, but when Timothy berates them for teasing a poor, motherless baby, they agree to help. Using "psychology," they give Dumbo a "magic feather" that will supposedly help him fly. To his surprise and everyone else's, it works!

Timothy comes up with a plan. When they get back to the circus, Dumbo waits to reveal his new ability until he's performing with the clowns. But as he jumps from the high platform, the magic feather is torn from his grasp. It's only Timothy's frantic pleas to open his ears that gives him the courage to try. And boy, does he fly! His amazing ability is the making of superstar. His mother is released from jail, and the little elephant becomes a celebrated attraction, with his own agent: Timothy Mouse.