Prince And The Pauper Meets The West Wing

Replacing a character, like Dave with a lookalike has been a plot staple probably since the invention of drama. The key to making the story interesting, of course, is that the substitute has to be someone whose personality and beliefs are in complete opposition to the person he's replacing. The 1993 comedy Dave has that look-alike opposites thing covered. Dave Kovic (Kevin Kline) is a sweet guy, warm-hearted, generous, and helpful. Bill Mitchell (also played by Kevin Kline) is cold-hearted, mean-spirited, and corrupt.

Unfortunately for the nation, it's Mitchell who is President of the United States. Kovic runs an employment agency and earns a little on the side playing on his uncanny resemblance to the President at such events as grand openings of used car lots.

Dave's part-time job catches the attention of the Secret Service. No, he's not in trouble, they have a job for him. Dave is recruited to play the part of Mitchell in non-speaking roles. Waving to crowds, primarily. 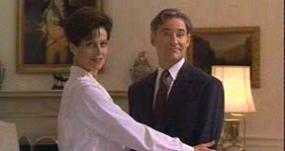 The hidden agenda to hiring Kovic is to give President Mitchell more undocumented free time to spend with his mistress. Everything goes smoothly until Mitchell has a massive stroke while with his mistress. The president is in a coma from which he might never recover.

Now the White House Communications Director Alan Reed (Kevin Dunn) and Chief of Staff Bob Alexander (Frank Langella, more sinister here than he ever was playing Dracula) approach Kovic about playing the role of President full time. Why? They tell him it is because the Vice President is insane. The truth is they are desperate to cover up their own and Mitchell's corruption.

Naive Dave buys the story but wonders if the substitution is possible. Surely the First Lady Ellen Mitchell (Sigourney Weaver) won't be fooled! Not to worry, he's told, the President and First Lady hate each other and haven't spoken in private for years. So the plan is a go.

The conspirators create a mild stroke as a cover for putting "the president" under wraps for a while, while giving Dave a crash course in being Bill Mitchell. And before you know it, Kovic is on, hosting cabinet meetings and running the executive branch.

There's a snag, though. Kovic looks like Mitchell, and with sufficient coaching, he walks like Mitchell and talks like Mitchell. But he is still Dave. He is still the cockeyed optimistic friend of the underdog. Even the presidential dogs can tell the difference between the guy who got them for their photo-op potential and the new guy who genuinely enjoys playing with them.

The public takes to this new side they're seeing of President Mitchell. And, whoops, First Lady Ellen Mitchell thinks she is falling in love with her 'husband' all over again.

And Dave, with his increasing popularity, is becoming a threat to the corrupt puppeteers who made him their figurehead.

Dave was directed by Ivan Reitman and written by Gary Ross.