Claymation Christmas movies fill everybody who grew up with them with nostalgia and sentiment.

Claymation is form of stop motion animation and was coined and trademarked by Will Vinton in 1978. Stop motion animation is when the filmmakers comprise the film by setting scenes with moveable objects, in this case clay. In order to make the objects appear to be in motion, they film the object in one position, take a picture, then move the object to a new position and take another picture. After all the pictures from every scene in the movie is complete, they are downloaded to a computer and the film is pieced together.

This process continues until the scene and eventually the film, is complete. As you can imagine, stop motion animation films take a long to time from start to finish.

Though Vinton is the most well-known Claymation filmmaker, there are a few others that have made Claymation Christmas movies.

One of the most well-known and beloved Claymation Christmas films of all time, Rudolph the Red Nosed Reindeer was written by Robert May and Romeo Muller. This hour-long clay stop motion animation film had its first run on television in 1964 and has aired every single year after. Aside from Rudolph, some of the most memorable clay characters in this Christmas movie include:

Rudolph the Red Nosed Reindeer got a makeover in 2005 when it was digitally remastered. Though the film had some work done, it still looks like the original 1964 release, just with a little more picture clarity. Thankfully, those who remastered the film knew that it just isn't possible to make one of the best Christmas films of all time any better.

This film features a dinosaur named Rex who embarks on a journey to discover the real meaning of the term wassail, from the Christmas carol Here We Come a Wassailing. The made for television film was released in 1987 and won Will Vinton an Emmy Award for "Outstanding Animated Film" the following year in 1988.

Written by Tim Burton, this film is a critical darling and adored by people young and old. Now considered one of Burton's biggest successes, at first, Disney did not want to make The Nightmare Before Christmas the film, claiming the subject matter was too "dark" for young children. Though, to be fair, the film really started out as a poem written by Burton. Burton collaborated with animator and co-worker Henry Selick, along with over 200 production crew staff and a multitude of screenwriters to complete the film. 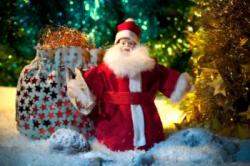 For die hard Claymation fans, it is sad to see this ages old technique fall by the wayside to make way for the glitz and gloss of computer graphic imaging (CGI) films. Though CGI is no doubt, really cool and the films, if done well, look amazing, there is something to be said about the warmth and artistry that goes into clay stop motion animation films. This same warmth and artistry just hasn't been captured by computer graphics. Maybe that's why Christmas films like Rudolph have been airing for decades.