Three urbanites, close friends since childhood, are approaching the big Four Oh in crises of varying natures. Supermarket manager Phil Berquist (Daniel Stern) has the most blatant crisis. His hellish marriage to his boss's daughter has imploded in a spectacular fashion, when the young woman he has been having an affair with shows up to confront him at a party. His wife has left him, and he's lost his job. 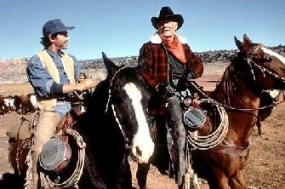 Sporting goods store owner Ed Furillo (Bruno Kirby) has a crisis many men would be willing to try out; he's just recently left playing the field for marriage to a 24-year-old underwear model. But now the beautiful young wife who he adores wants to start a family.

The movie's main protagonist, radio executive Mitch Robbins (Billy Crystal), has a crisis of a more existential nature. He has a decent job, a loving wife, and two great kids. But he looks around at his life, and realizes: "This is as good as it's going to get, and it's not that great."

Their solution? Go on a cattle drive!

It's a high-end dude ranch sort of arrangement where participants receive several days of training and then take part in a genuine cattle drive, driving a herd of cows from Arizona to Colorado. Predictable humor is mined from watching the early efforts of these city slickers to ride and rope, leavened by Crystal's wry commentary. Their trail boss Curly Washburn (Jack Palance) is an iconic Western cowboy whom they both fear and admire.

As the drive progresses, our heroes' skills improve, and Mitch even develops almost a friendship with Curly, forged in the crisis of a calf delivery.

But then things get serious. The first disaster is the death of Curly. The old cowboy dies quietly of natural causes, sitting on a rock with a plate of beans in his hand. Out of contact with the world, the cowboys can only bury Curly and move on.

No longer under Curly's watchful eye, the real cowboys on the drive get drunk, run amok, realize they're going to be in deep trouble and take off - stranding the paying vacationers in the wilderness with a herd of cattle. The consensus among the vacationers is to abandon the cattle and strike out for civilization, but our three city slickers have imbibed enough cowboy ethic to make them determined to bring in the herd.

And if none of the above sounds particularly amusing, remember, it's not what they do, it's the way they do it.

City Slickers was directed by Ron Underwood and written by Lowell Ganz and Babaloo Mandel. Jack Palance won a Best Supporting Actor Oscar for his role as Curly.