If you're looking to buy Stargate Atlantis DVDs, read on for more information about the series, current releases, and available retailers.

The Stargate universe was created in the 1994 feature film Stargate. When archeologists unearth a mysterious stone ring in Egypt, they unknowingly discover a portal between galaxies. In 1997, the television series Stargate SG-1 continued the story by introducing an elite military team entrusted with the care of the Earth's Stargate. The team uses the portal to explore new worlds and search for allies in their fight against the Goa'uld race.

Stargate SG-1 originally broadcasted on Showtime for five seasons. The series then moved to the Sci-Fi Channel for another five seasons, to date. It was on the Sci-Fi Channel that the spin-off series Stargate Atlantis premiered in 2004. When the Stargate SG-1 team finds a new outpost of the ancient civilization that created the Stargates, a new cast travels to the Pegasus Galaxy in search of the secrets of Atlantis and faces a new alien menace -- the Wraiths.

Stargate Atlantis began with a two-hour TV movie, Stargate Atlantis: Rising. The DVD includes a commentary track featuring the director, Martin Wood, and Joe Flanigan, one of the cast members. It also offers several preview features, including an introduction to Atlantis, a look at the second season, and promotional material for the video game Stargate SG-1: The Alliance.

Stargate Atlantis - The Complete First Season contains 19 episodes on 5 discs, including the pilot movie. Special features include commentary from assorted cast and crew members, photo galleries, production design galleries, a review of season one, a set tour, and a few behind-the-scenes features.

Stargate Atlantis - The Complete Second Season contains 20 episodes on five discs. Special features include commentary from the director, actors, writers, and producers, photo galleries, production design galleries, character and actor profiles, and in-depth looks at the work behind the series.

Season three finished the first half of its broadcast run in fall of 2006 and will continue in spring of 2007. Currently, there is no set release date for DVDs of the third season. Season four is slated to begin in late 2007.

Where to Buy Stargate Atlantis DVDs 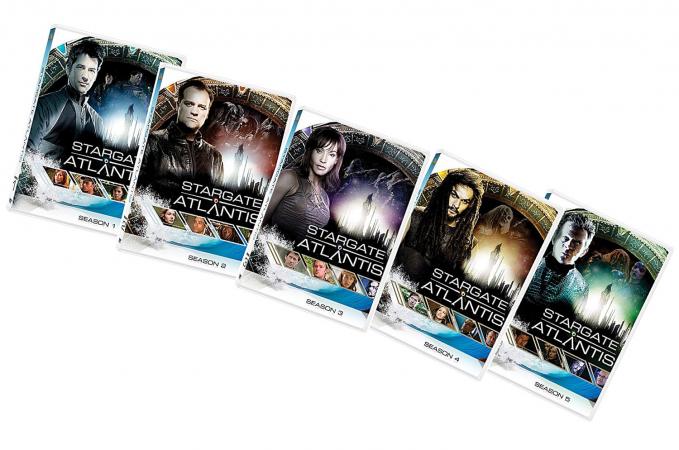 Online auction sites can be a great place to buy Stargate Atlantis DVDs. However, bootleg, or illegally copied, DVDs can be a problem when shopping for DVD sets. Bootleg DVDs typically originate in Taiwan and Hong Kong, although U.S. sellers may also import them, so the seller's location won't necessarily help determine the legality of a DVD. A common sign of a bootleg DVD set is for it to contain fewer DVDs than the official release; a six-DVD series may be offered on three DVDs. The DVDs may claim to be an "all-regions" DVD, and Chinese subtitles are also common on bootleg releases. Sellers of bootleg DVDs try to lure in shoppers with cheap prices. If a deal seems too good to be true, it probably is.