One of the great things about video-on-demand (VOD) technology is being able to download a movie any time you feel like it. Gone are the days of having to get into your car, drive down to the video store, and hope the movie you want is available. There are many download options online to choose from that will let you watch from a variety of devices any time you feel the need to view a flick.

With Amazon's popular online store, you can rent or buy movies and TV shows using your PC, iOS, Android, and Fire phones and tablets, as well as Amazon Fire Sticks, Roku, and TiVo. You can buy films for as little as $2.99, although more recent movies will cost around $19.99 and up. PCMag.com gave Amazon's VOD service an "Excellent" rating. Movies are available from just about every genre you can think of, including documentaries, foreign films, and popular cable and network TV series. Amazon Instant Video allows for both streaming and downloading. When you buy a movie, you will see the option to download it, which you can do to two locations. Compatible devices include iOS and Apple tablets and phones, Blu-Ray players, Amazon's Kindle Fire tablet, game consoles, and HD smart TVs. Note that with some newer films, licensing may not allow downloads, but a notice will appear to you before completing purchase if that's the case.

Despite the fact this is an Apple product, you can use iTunes to download the digital rights to movies to watch on a Mac or a PC computer, as well as any iOS device, such as iPhone, iPad, and iPod Touch. You can also use Apple TV, but movies do not download to this particular device. The service has an impressive 85,000 plus movies and over 300,000 TV shows. Some movies and shows even include "iTunes Extras," such as deleted scenes and other "behind the scenes" videos you might find on a DVD or Blu-Ray version of a movie.

Apple's library spans all genres with typical Hollywood favorites, as well as international and independent fare. It also works with iCloud, which means once you have downloaded a movie, you can access it from any of your devices at any time and on more than one device with their Family Sharing service. You can only download movies and shows you have purchased (rentals must be watched via stream in iTunes). To download, just go to your Library in the app, choose your item, and tap the download icon (a cloud with a down arrow). Like Amazon's service, PCMag.com gives Apple iTunes movie service an "Excellent" rating.

Internet Archive is a non-profit site dedicated to putting published works in the public domain online to increase access. In addition to movies, they have web pages, books, text, audio files, videos, images, and software. It's completely free to use and to upload or download an item. Most of the films for download are older, classic black and white films, shorts, and silent films. You can download movies as either mpeg, mp4, oggvideo, or torrent files. The type and quality of each file depends on what's been uploaded, so it will be different for every film. The Internet Archive has been funded by many major foundations and recently was lauded by the prestigious MacArthur Foundation as one of "Eight Projects That Could Change the World." 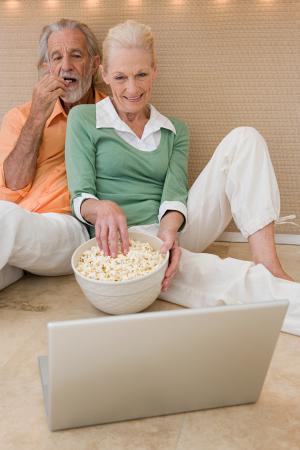 For years Netflix has been one of the top, if not the top, online streaming site with over 93 million subscribers in the U.S. and internationally, a number that is projected to continue to grow. In November, 2016, the company introduced the ability for members to download select movies and TV series, as well as original Netflix productions. You can download onto your computer, phones, tablets, and iOS/Android smartphones.

Downloading is part of all of Netflix's subscription plans, which run from $11.99 to $17.99 per month. Netflix provides movies and TV shows in a array of genres, as well as their critically acclaimed original series, such as Stranger Things, Orange is the New Black, and House of Cards.

To download a video, find the title you are interested in and see if the download icon is next to it (an arrow pointing down above a line). If you don't have a specific title in mind, you can use the "Available for Download" option from the main Netflix menu. Once you have chosen an item, click on the download icon to complete the process.

Walmart owns VUDU, and it provides both streaming and download options. You can create an account via VUDU or also through your Walmart.com ID if you have one. VUDU supports the use of Ultraviolet, a digital rights library service which lets you access your streaming and downloaded content from multiple different devices. Ultraviolet is supported by several other streaming services, such as Disney, although some of the major ones (i.e. Amazon) do not.

VUDU has a strong selection of titles with movies from several decades from all the usual genres. Movies are available in HD and SD, and VUDU upgraded their apps in late 2016 so you can now watch in HDX (1080p) resolution on iOS devices. You can watch your downloaded movies on a Mac or PC computer, any iOS or Android device, using Smart TV, Blu Ray, and game consoles, as well as Roku and Google Chromecast.

Movie prices fall in line with other similar services, such as Amazon. Overall, VUDU is a solid service with a large library of items that lacks some of the search capabilities of other options, such as Amazon and Netflix. It was given a 5.93 out of 10 rating by the consumer ranking site Top Ten Reviews. To download a movie once you have purchased it, select the movie quality (SD, HD or HDX) and look for the "Download and Watch Later" option.

In general, the quality of the movies you download from these services will be high definition (HD) with either 720p or 1080p resolution. Standard Definition (SD) is also usually offered as an option, and this is the best choice when you do not have a HD TV or device (or, if you're willing to sacrifice a bit of quality to save some money on the purchase price). It's also important to know that a 1080p version of a movie will be a larger file than a 720p one and if storage on your device is an issue, that's something to be aware of. If you're downloading to purchase rather than rent, it's a good idea to purchase the highest resolution possible (which in some cases may even be 4K as this resolution becomes more available).