Army of Darkness, the third (and so far final) installment in director Sam Raimi's Evil Dead series is the type of film that must be seen to be believed. Bruce Campbell (The Adventures of Brisco County, Jr., Xena: Warrior Princess, Evil Dead 2) returns yet again to play Ash, the one-handed demon slayer who delivers the cheesy macho one liners with smirking seriousness. Its Raimi style camp at its best and shows just how much fun a horror director can have when he has an actual budget to play with. 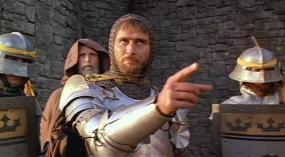 Evil Dead 2 ends with the transportation of Ash, his chainsaw, shotgun, and Oldsmobile to the 1300s, where he finds himself fulfilling the prophecy in the Necronomicon. Naturally, it is from there that Army of Darkness picks up, although some minor continuity errors had to be made to let there be a movie. Instead of being hailed as a hero immediately as we see in Evil Dead 2, Ash is assumed a soldier of an enemy army and immediately taken into custody. He is thrown into a pit with a "Deadite" and must defend himself, which he does in typical Ash fashion.

After proving his worth and dispatching the Deadite in the pit, Ash is chosen to quest for the Necronomicon, the fabled book of the dead, which has the power to both free the beleaguered kingdom from the Deadites and return him to his own time. Given specific instructions to speak the magic words "Klatau, Verata, Nikto" before taking the book, Ash manages to bungle this simple task and awakens an army of the dead. This, of course, is the titular Army of Darkness.

With the Necronomicon in hand, Ash returns to the kingdom but now must help the weary soldiers defend themselves from the approaching army. Only if he is victorious will Ash manage to save the kingdom, fulfill the Necronomicon prophecy, and return home.

Just as Peter Jackson (The Lord of the Rings: The Fellowship of the Ring and King Kong) launched his career on the back of his bizarre comedy-horror title Dead Alive, Sam Raimi (Spider-Man and A Simple Plan) began by making campy horror films. While Evil Dead was little more than a gross-out fest, Evil Dead 2 was quite tongue-in-cheek in its presentation. With Army of Darkness, Raimi pulled out all the stops and made a film that is intentionally far more comedic than horrifying. Instead of giving nods to the likes of Wes Craven and Clive Barker in his movie, Raimi pays homage to the Three Stooges and writes lines for Ash that sound ridiculous no matter who is delivering them but have extra punch when spit out of the wry mouth of Bruce Campbell. In fact, several of Campbell's one-liners were "adapted" for the video game character Duke Nuke'em.

Raimi does like his little visual in-jokes and uses them well in Army of Darkness. When Ash opens the trunk of his car, for example, we can see a copy of Fangoria, a popular horror movie magazine. The car itself, in fact, actually belongs to Raimi, and the items we see in the trunk are not props, but the things that the director actually had in there.

In both the DVD release and a "special edition" VHS release of the film, an alternate ending is included. In it Ash miscounts the drops of sleeping potion he must use to get back to the modern world and oversleeps by a hundred years. He awakes to a world which has been devastated by nuclear war, and he may well be the last man alive. This was the original scripted ending for the film, and while many fans prefer it to the ending from the theatrical release, it was apparently deemed too depressing and was replaced at the last minute.