Aliens, the movie sequel to Ridley Scott's Alien, almost doesn't belong in a horror category at all. Directed by James Cameron in 1986 (The Terminator, Terminator 2), this film is more of an action movie than anything else. But, it is an action movie that transcends the action genre by mixing in elements of science fiction and horror in the same way that the original Alien transcended both other genres by combining them so flawlessly.

This Time There Are Hundreds Of Them

When writing the screenplay, James Cameron had a few hurdles to overcome. It had been nearly ten years since Alien first shocked audiences with its premiere chest-buster scene, and the moviegoers of 1986 would require a lot more to be shocked. He needed something that would make people interested in Giger's foul creature once again. He also needed a plausible explanation for why anyone would be encountering this creature again when Sigourney Weaver's character, Ellen Ripley, destroyed the only one known to have existed in the first film. Finally, and most importantly, he needed a compelling enough reason for the character of Ripley to even entertain the idea of facing off against the dreaded Alien once more. It may have been easy to simply make a Son of Alien type film, with plot holes big enough to fly a Betty through and another two hours rehashing the scenes of the first film, but Cameron wanted to make a different kind of movie altogether.

Getting Ripley To Go Back

Cameron found his answer in the most obvious place possible. Start the film where the original ended. Ripley is still in "hyper-sleep" as she was at the end of the first movie, but she's drifted off course and has been out there for almost sixty years. Rescued by a deep space salvage crew, she returns home to find that her young daughter has grown old and died, everyone she ever knew is long gone, and she wakes up every night clutching her chest, desperately frightened that there is a creature waiting to burst through her ribs. To top it off, no one at the company she works for believes her story, and she is being held personally responsible for the destruction of the Nostromo. She also learns that the deserted planet on which her crew discovered the being is now home to a space colony with over a hundred people, none of which have mentioned any trouble from extraterrestrials with acid for blood.

It doesn't take long for the colonists to locate the same derelict ship (in a brilliant scene that was cut from the original release due to time constraints but which has been restored for the collector's edition DVD) that the crew of the Nostromo found so long before. When the company loses contact with the colony, they start to think there may have been something to Ripley's story. She is eventually coaxed into returning to the planet with a company of space Marines to serve in an advisory capacity.

When the Marines arrive at the colony, they discover it apparently deserted. Thinking there is no threat and they must have missed whatever happened there, they let their guard down and are ambushed by swarms of creatures. Ripley's words of warning, "Just one of those things managed to kill my entire crew", serve as a bleak omen to the heavy losses the Marines suffer. Ripley finds herself once again fighting against the horrifying creatures when she was only supposed to be an advisor.

Why The Movie Aliens Works 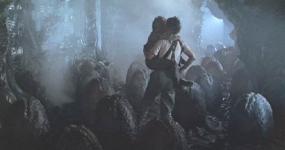 This is a landmark film because it is one of the few sequels which have surpassed its predecessor in terms of popularity. Alien the Movie is a fine film in its own right, but this sequel has so much more going for it in terms of story (hordes of monsters are more frightening than one), characters (Ripley meets "Newt", a ten-year-old girl who serves as a perfect stand-in for her own lost daughter, and no one can forget Lance Henrickson as Bishop or Bill Paxton as Hudson), memorable quotes ("Game over, man! Game over!" and "Get away from her, you BITCH!"), and pure action. Alien 3 and Alien: Resurrection were both something of a let-down for fans, and many consider the series at an end with this movie. Most of those (as well as the people who liked the later films) consider Aliens their favorite film in the series. It certainly changed the career of Sigourney Weaver, who earned a Best Actress nomination for the film and started commanding film salaries that rivaled those of Bruce Willis (Die Hard) and Arnold Schwarzenegger.

The climactic scene in which Ripley battles the queen creature was a stroke of filmmaking genius on Cameron's behalf. The things that made the original creatures so frightening were its size and strength and the particularly nasty way it bleeds ("You don't dare kill it," one character muses) also serve as a screenwriter's nightmare because to pit a puny human against the biggest and scariest monster of them all is simply not believable.

When Ripley steps into the exoskeleton of the power loader and we see that she has leveled the ground between herself and the Queen, however, we realize that now we are in for a FIGHT. As a result, there is almost no way to watch the final scenes of the movie without becoming excited and wanting to root for Ripley in the biggest intergalactic catfight of all time.

0
Comments
© 2006-2021 LoveToKnow, Corp., except where otherwise noted. All Rights Reserved.
Aliens the Movie