Alien, the movie released in 1979, was director Ridley Scott's (Gladiator, Hannibal) career changing film. Coming at the perfect time to blend the science fiction and horror genres, the movie made not only Scott's career but also that of its heroine, Ms. Sigourney Weaver. What made this movie special was the fact that it was different than anything we had seen before while drawing on familiar archetypes at the same time. Horror novelist Stephen King called the movie "a haunted house film set in outer space," and while that may not be a perfect assessment, it is a good analogy to describe the mixture of science fiction and gothic horror.

The movie Alien opens with the crew of the Nostromo, a deep-space scavenger ship, in "hyper-sleep", a state of hibernation required to endure long space journeys. The ship's captain, Dallas (Tom Skerritt) and his crew are awakened by "Mother", the ships computer, with a report of a distant distress signal. Required by law and company regulations to respond to any and all such signals, the crew travels to the nearby planet from where the signal is originating. A landing party is formed and discovers a derelict spacecraft on the surface, apparently there for hundreds, perhaps thousands of years.

One crewman, Kane (John Hurt), discovers a chamber literally filled with odd "eggs". One of these "hatches" and the bizarre crablike creature which emerges attacks Kane, latching onto his face after dissolving the glass shield of his helmet with an acidic secretion. Kane is returned to the ship despite arguments from Lt. Ellen Ripley (Weaver), the ship's first officer, that Kane should be quarantined outside the vessel while infected by the unknown creature. Attempts to remove the being fail as it is apparent the creature can kill Kane if it is tampered with. Inexplicably, the creature falls off on its own and eventually dies.

Kane seems fine at first and is deemed medically fit to return to duty. He joins the rest of the crew for dinner and one of the most memorable scenes in movie history ensues. Kane suddenly starts to cough and choke, then convulses on the table. Suddenly his chest literally bursts open and a tiny alien creature emerges, hissing at the crew and then scurrying across the table. The crew is understandably shocked and horrified but eventually collect themselves and decides to hunt for the creature.

The remainder of the movie is a typical cat and mouse game with the remaining crew searching for the creature and being killed off one by one. Finally it is up to Ripley to attempt to defeat the monster alone. 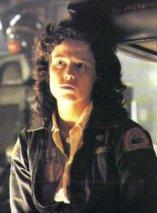 This horror/science fiction movie is memorable for a number of reasons. It came at a time when science fiction films were experiencing resurgence in popularity thanks to both Star Wars and Close Encounters of the Third Kind, but it offered a very different view of the future and of extraterrestrial life than either film. The horror genre was also experiencing new life, thanks to recent films such as Dawn of the Dead and The Hills Have Eyes, both released not long before. The art designs (and the design of the alien itself) by H. R. Giger were perfect for the film's mood as the artist's work seamlessly blends biology and mechanics in dark and disturbing images. And, of course, the infamous chest-bursting scene which, while tame by today's standards, shocked audiences in 1979 in the same way that the shower scene in Psycho did in 1960.

The movie went on to gross $60 million in its initial release, spawn several sequels (Aliens - 1986, Alien3 - 1992, Alien: Resurrection - 1997) and two crossover films (Alien vs. Predator - 2004, and Alien vs. Predator 2, slated for release in 2007 according to IMDB). It also helped define the career of Weaver, who was nominated for an Academy Award in 1987 for her performance in the sequel Aliens the Movie directed by Terminator 2 helmsman James Cameron.

0
Comments
© 2006-2021 LoveToKnow, Corp., except where otherwise noted. All Rights Reserved.
Alien the Movie