The Notebook movie leaves viewers reaching for their tissues. The storyline brings viewers to think twice about the geriatric population, just as the Nicholas Sparks novel it's based on did. It leaves hope in its viewers, a hope for themselves, as well as their parents and grandparents.

Nicholas Sparks is well-known by romantic novel and movie fans for his stories that incorporate themes of Christian faith, love, tragedy, and fate. The Notebook was his first novel, while Message in a Bottle was the first to be adapted to film. The story in the novel of an elderly man reading a love story to a woman in a nursing home has a very different ending than in the film version. The inspiration for the eldery couple in the story came from the grandparents of Sparks' wife.

Romantic movie fans don't initially associate romance with elderly people, with it usually being something reserved for teenagers and young adults in films. In this story, Sparks shows that older people still have a lot of romance in them, especially when they have to fight to keep it.

An elderly man meets up with an elderly woman in a nursing home and begins reading to her a story of romance, one that tells of two young people who fell in love back in 1940. Their romance is wrought with conflict even from the beginning. While Allie is from a well-to-do family who is spending time at their summer home, Noah is working at a lumber mill. Nevertheless, they can't seem to stay away from each other. They enter into a quick and torrid love affair.

Noah shows Allie around an old abandoned house that he promises to renovate into a home they can share in a new life together, but just before they are about to consummate their relationship, they are informed by a friend that Allie's parents are looking for her. Noah overhears Allie's parents telling her that he isn't good enough for her. He breaks up with her, but when he later regrets his rash decision, she and her family have already left to go back home.

While Noah writes several letters to Allie, her mother hides them all from her, leaving Allie to assume Noah is no longer interested. He gives up and goes off to the war, while she goes to college. They both go on to lead productive lives, but neither one can forget "the one that got away."

By this time, viewers have rightfully assumed that Noah is the old man and that the old woman is Allie. As some cruel test of fate, although they spent years apart in one of the lengthiest of romances, she now has Alzheimer's and doesn't remember who he is. She can't remember the love of her life, the man she fought so hard to be with. He believes he can get through to her, though, and comes to the nursing home every day to read her their story, trying to ignite his love's memory. He refuses to give up hope and tires to defy the ultimate results of the Alzheimer's disease that has stolen Allie from him. 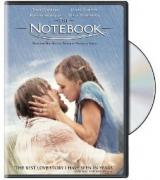 Just as The Notebook movie was well-received by fans, movie critic Roger Ebert felt the same, giving praise to Sparks' original story, more than the film, stating that the "actors are blessed by good material," and giving it three-and-a-half stars out of four. He isn't the only critic to appreciate the film, as The Notebook also won several awards and was nominated for even more.

Romance Doesn't Have to Die

The Notebook is one of the top "chick flicks" out there, but not because of a "young love" storyline. It leaves viewers with hope. Sparks does this with a story that is both sad and encouraging. Being elderly doesn't mean that romance is something that has to be left in the past. It can grow right along with the couple in love.

Comments
© 2006-2021 LoveToKnow, Corp., except where otherwise noted. All Rights Reserved.
The Notebook Movie