Disney/Pixar's roster of outstanding films includes a number of titles that seem to cry out for sequels. When it was announced that Cars would be the first Pixar movie since Toy Story to have a sequel, it came as something of a surprise. After all, Cars was widely considered to be the weakest Pixar film, with a Rotten Tomatoes rating of 74%. This is certainly respectable, but when compared to the 96% cumulative Rotten Tomatoes rating for Ratatouille, eyebrows were raised as to why Cars was becoming a franchise.

The truth was, Cars was the most successful Pixar film in terms of not only box office (~$460 million), but also in terms of marketing. Between marketing toys, sponsorship with the race cars themselves, and the cute, cartoony look of all the vehicles, not to mention the popularity of NASCAR, Cars was a perfect storm of moneymaking potential, and no one in Hollywood passes up that kind of opportunity.

While the first Cars film was received moderately well, the sequel received mixed reviews at best. The New York Times said it was "lacking in soul or sublimity." In addition, it has only a 38% "fresh" rating on Rotten Tomatoes, making it the worst-reviewed Pixar film by a very large margin.

It is not all bad. As always the Pixar animation and voice work is excellent and the story, as it should, moves quickly and logically to it conclusion. Pixar knows its audience are young kids and attacks their senses with the kind of kung fu, high fiving action and jokes that only they can relate to. Yet that is also its biggest problem. One feels that, for any child above five, the film would raise too many questions. For example, why do the cars know kung fu? If there are no humans in the world how are the cars created? Why do the cars drink and eat human food?

At one point Tow Mater, on his way for a beer, mistakes Wasabi for pistachio ice cream and, as its free, tells the confused server to fill his bowl to the top. The server does as Mater asks, but as soon as Mater eats it he has to rush to the toilet - a crazy, computerized Japanese toilet. On many levels this joke falls flat on its face. First of all how many kids outside of Japan would know what Wasabi is? Even if the joke is meant for older viewers it will have no more effect on them than raising their eyebrows.

To say such things you run the risk of people saying to you its only a film, (and a kid's film at that) so it's not supposed to be believable. Yet the fact remains that the reason a film like Toy Story was successful was because you could believe in the world they lived in. The toys didn't have parents - they had makers. While someone like Woody was part of a brand, and there were many other Woodys that looked exactly like him, the environment in Andy's room had helped him create his own personality.

Starting with a James Bond style car character spying on an international conspiracy, Cars 2 does not create that foundation where viewers can believe that like humans, cars can eat ice cream, drink beer, know kung fu, use toilets, develop careers and peruse museums. Of course for youngsters that may be its charm and where they find the humor, but older viewers will find it difficult to suspend their belief long enough to surrender themselves to the story.

The sequel is bright and shiny and exciting in places, and while it doesn't have any depth, it'll certainly please the youngsters. Some of the cleverness from the first film feels tired, like leftovers from the back of the fridge, but the new settings and characters, combined with the shorter run time, at least make sure the film isn't objectionable, even if it's not particularly dynamic. 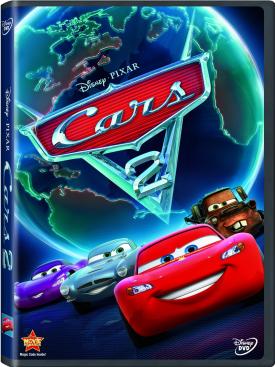 The story follows Lightning McQueen (Owen Wilson) as he travels to Asia and Europe with his friend Tow Mater (Larry the Cable Guy) to participate in a World Grand Prix race not only to determine the fastest car on earth, but to introduce a new environmentally friendly fuel called Allinol.

Unknown to them the Lemons, led by Professor Zundapp, are plotting to secure their oil profits by using a weapon disguised as a TV camera to shoot the drivers' Allinol fuel tanks as they whiz past.

The only ones who know about the plot are British spies Finn McMissile (Michael Caine) and his partner Holley Shiftwell (Emily Mortimer) who travel to the Tokyo grand prix to meet with the American spy car Rod "Torque" Redline. However, with Torque captured, Holley and Finn presume that Mater is the American dressed in a typically brilliant disguise. With Mater thinking he is on a date with Shiftwell, he inadvertently joins them in foiling the Lemons' plan.

Mater continues to believe Holley has the hots for him, until, while spying with Finn and Holley on one of the Lemons' secret meetings, he overhears the Lemons' plans to kill his friend McQueen. Unable to control his outrage and revealing himself, the Lemons promptly capture him, McMissile, and Shiftwell, take them to London - the location of the next grand prix - and tie them up in the cogs of the Big Bentley clock.

Finally Mater understands what is happening. With McMissile and Shiftwell's help he escapes the tower clock and heads to the London grand prix to warn McQueen. It is the probably the worst thing he could have done. Only moments later McMissile and Shiftwell discover that the Lemons have planted a bomb on Mater that only its creator can deactivate.

Motivated by this new information, however, they also manage to escape and in the nick of time pass this information to Mater. Mater immediately drives away from his friend, intent on exploding somewhere safe, but McQueen, not understanding why he is driving away, sets off in pursuit. They travel so far that unbeknownst to them they go outside the range of Professor Zundapp's detonator and Zundapp has to send out two cars to find and kill them.

At this point McMissile and Shiftwell step in. They stop Zundapp's henchman, capture Zundapp and find out that the name of the bomb maker was a car called Axelrod. Hearing this Mater confronts Axelrod, telling him that if he doesn't deactivate they will both have to die together.

Cars 2 hit theaters on June 18, 2011, which ensured it would be in theaters for the lucrative 4th of July weekend. It was number one its opening weekend with more than $66 million domestically, beating every previous Pixar title's first weekend take, including the original Cars. Its final cumulative box office take was more than half a billion dollars, beating the original film by about $100 million.

Sadly, some cast members from the original Cars were unable to return for the sequel. These include Paul Newman and George Carlin, both of whom passed between the films. Fortunately, all the rest of the primary cast members were able to return, including:

A few new cast members bring life to some exciting new vehicles in Cars 2, including:

The introduction of new dynamics by having the characters take a journey gives Cars 2 a very different feel from the first. The road trip nature of the story is a welcome opportunity to introduce new characters and settings, but it never goes anywhere surprising and seems to complicate things simply for the sake of making them complicated. Cars 2 is fun in the way the first movie was, which is to say occasionally very fun. Blessedly, the film is shorter than two hours, a major failing of the lengthy original film.