Zootopia is a fantastic animated movie from Walt Disney Pictures. It has become such a big hit that it is guaranteed to play on repeat in any home with children under 10. The good news is, it totally deserves to.

Survival of the Cutest

In a world where animals have evolved into civilization, Zootopia is the big city. A small town farm bunny named Judy Hopps (Ginnifer Goodwin) dreams of becoming a police officer in Zootopia. Since no rabbit has ever joined the force, everyone from the town bully to Judy's own father (Don Lake) warns her not to even try. But Judy doesn't listen and makes it through the police academy, despite being smaller than the rhinos, bears, and other large animals in her class.

Even as the first rabbit in Zootopia PD, Judy has to fight for respect. Chief Bogo (Idris Elba) would love her to wash out so he gives her an impossible case to solve: Find a missing otter in only 48 hours. Judy ends up unraveling a conspiracy to make animals revert to their savage state. Savage is the worst thing an animal can be in Zootopia because they've come so far since primitive days.

It Takes a Village

These are only some of the thousands of people it took to bring Zootopia to life:

Animated movies work best when they work for both kids and parents, and Zootopia excels in both regards. In fact, Zootopia may be aimed primarily at the parents, with the kids as a bonus. The themes of animal racism mirroring human society are very George Orwell, and even the mechanics of a police investigation are pretty adult. Grown-ups will also notice little details in the background, like the Zootopia version of Uber or a different take on the Apple Macintosh symbol.

Many critics have already praised the social allegory of Zootopia although it didn't work for everybody. Writer Jim Reardon, who also co-lead the story department, was a writer on The Simpsons so he is a master at working on multiple levels. The team also worked on Frozen and Wreck-It Ralph so they are a dream team of clever storytellers. 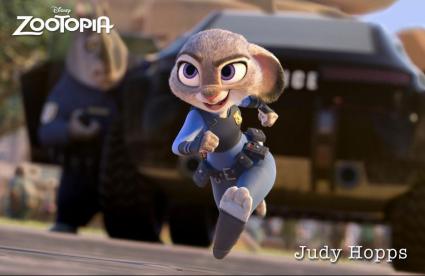 Independent of social metaphor, Zootopia also teaches good values. When her colleagues expect her to fail, Judy takes the initiative and does double the work she's assigned. Steve Martin has a saying whenever someone asks him how to succeed in show business. He says, "Be so good they can't ignore you." Judy is taking his advice. She's making herself indispensable at her job. In this case, her job was a quota of 100 parking tickets, so she gave 200. Sympathies are due to the 200 motorists too, but it's just a fine. The important thing is Judy turns a lousy assignment into an opportunity.

Judy faces prejudice against bunnies, but she also has lessons to learn herself. Foxes are bullies and con artists, and indeed Judy busts Nick Wilde (Jason Bateman) in the act. Yet she teams up with Nick and sees the value of his street smarts. Her faith in him inspires Nick to be his best self. 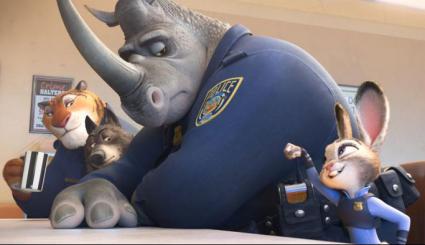 On the surface, Zootopia is just a rousing adventure perfect for kids. The mystery takes Judy and Nick to exotic locations where exciting chases and fights occur. The worlds are based on real-world environments, like a big metropolitan city or rain forests, but evolved with an animal twist.

Animation has come such a long way. With computers, they can make a world look as real and detailed as ours, only with talking animals in it. The animation is also responsible for some of the best jokes. An animal nudist colony may be the most bizarre concept ever committed to film. It's totally appropriate for kids because they're animals so still covered by fur, but since they're the only ones not wearing people clothes it's just weird.

There may be some scary parts for kids. When animals turn savage they are brutal, violent monsters. Don't worry, no one dies like in Disney classics The Lion King or Bambi, but the more realistic computer animation could come across as more intense. Scary can be healthy for young viewers. Many of us grew up with rites of passage like the wildebeest stampede or Wicked Witch of the West. Large Marge from Pee-Wee's Big Adventure was the one you'd work up the courage to look at with your eyes open, if you're a child of the 80s, along with Gremlins. Parents can decide the degree to which their kids are ready for Zootopia, maybe five and up as a ballpark estimate. 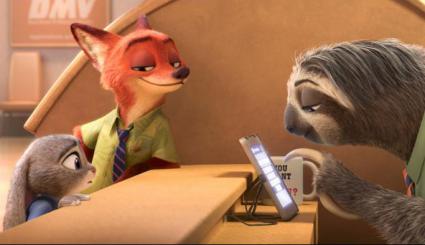 In a live-action movie you can judge the performances, but in animation, there are two entwined components. The animators did a superlative job breathing life into the world of Zootopia and the characters who inhabit it. This is not a silent movie though.

The voice cast includes many well-known celebrities, but they're not bringing their personas to the roles. They are truly playing the characters and blending into the world, even though the world involves bunnies, foxes, and rhinos. Goodwin is full of peppy spirit but is able to sound vulnerable when Judy lets her guard down. Bateman is charming when Nick is manipulating Judy and other characters, but his emotional moments come later in the film.

Other voices in smaller roles are still memorable. As the tiger, Clawhauser, sitting at the front desk of the precinct, Torrence gives excited readings of exposition, some that pay off subtly. He also gets a moment of emotional resonance that he delivers on. As Judy's parents, Hunt and Lake sound well-meaning but unintentionally discouraging, a complex line that real parents probably feel they walk.

As the mayor's assistant Bellwether, Slate is perhaps the only voice of encouragement and support to Judy. Elba keeps Bogo tough and gruff while Chong gives one of those animal nudists an appropriately out-there sound. Shakira plays the pop star Gazelle, perhaps the only stunt casting so she can sing a song, but by the time we hear her, Zootopia has earned it.

There are no missteps in Zootopia. Disney has created a world of imagination and adventure for kids with an intelligent commentary on adult life for parents.