London Has Fallen is the sequel to the hit 2013 movie Olympus Has Fallen. In the original, Secret Service agent Mike Banning (Gerard Butler) rescued President Benjamin Asher (Aaron Eckhart) from Korean terrorists who took over the White house. It was described by critics as "Die Hard in the White House." For the sequel, London Has Fallen is a thrilling new adventure for Mike and Ben, as all the characters in the movie appear to be on a first-name basis with The President.

Where We Left Off

Years after the events of Olympus, heroic Secret Service agent Mike Banning may be ready to settle down. He is expecting a child with his wife Leah (Radha Mitchell) and is considering tendering his resignation to the President. President Ben Asher is now in his second term. When he gets news that the British Prime Minister has died suddenly, Ben decides to attend the funeral for the sake of diplomacy. Secret Service Director Lynne Jacobs (Angela Bassett) is concerned that with all the international heads of state attending, all with their own security detail, protecting the President is too unpredictable. Ben has to attend for diplomacy and trusts Mike to keep him safe, but Ben doesn't know this might be Mike's last assignment.

Well, Lynne was right. Pakistani terrorists use the funeral to murder world leaders and demolish British landmarks. Now Mike and Ben are on the run through the backstreets of London, with armies of terrorists chasing them. The President's staff, including many characters returning from Olympus Has Fallen, are stuck watching the events in London from the White House. These include Vice President Allan Trumbull (Morgan Freeman), Secretary of Defense Ruth McMillan (Melissa Leo) and General Edward Klegg (Robert Forster).

It is impressive to see an active London crumble on film. This is an achievement in visual effects because there's no way to set off even a fraction of those public explosions without causing a real international incident. The effects work and give the audience a sense of crisis in a believable world as did the attack on D.C. in the original. 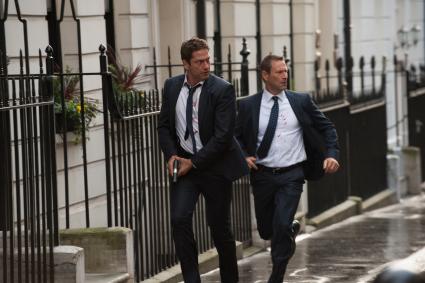 After that sequence, Ben and Mike remain isolated. The two of them run through an alley, on the empty streets, in a field, through an abandoned subway or a tunnel. It is plausible that the city would be vacant after the initial crisis because citizens are encouraged to stay inside, and wouldn't you if you'd seen Westminster Abbey explode? In practical filmmaker terms, this allows the crew to film in more controllable, unpopulated settings. It's a fair trade. If we want to see elaborate action sequences, we have to give up crowds of extras.

The action scenes are shot clearly and are easy to follow, which is no small luxury in these days of shaky-cam "guerrilla style" filmmaking. Those isolated locations allow director Babak Najafi to orchestrate shootouts in the London streets or the storming of the terrorist compound. A few beats may come off a tad stilted, like they're too exact, but the choreography of multiple elements in single takes is commendable. 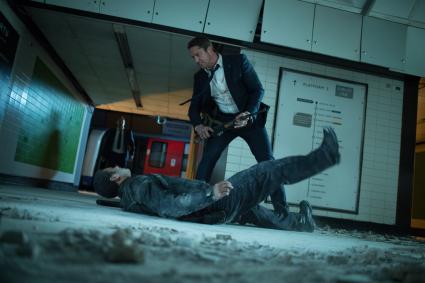 Mike embraces the bravado of a politically incorrect man of action. He outright says that everyone is a terrorist until proven otherwise, and the film proves him right because the terrorists have infiltrated public service and law enforcement. Mike has no compunction against slamming an assassin against concrete in a moving vehicle, and frankly he's gung ho to kill bad guys. It is perhaps inconsistent with the setup of a family man who was considering retiring, but it works for the genre. No one is suggesting that Mike could really get away with his violence even in extreme circumstances, but the movie is all in good fun. Mike is a feral animal, but he's the animal you want on your side. As a counterpoint, the tone was too much for Variety's critic.

There is a point to Mike's attitude: saving the day isn't clean. London Has Fallen playfully suggests that message, by portraying Mike as a caricature of bloodlust, lovingly so it seems. Mike admits he's being gratuitous, stabbing one terrorist beyond the point of incapacitating him. Ben confronts Mike on going too far but this only serves as lip service. Or it could be read as a comment on the audience. People want Taken or Jason Bourne to be PG-13 and stop the bad guys with no blood. Well, they can't have it both ways. Forbes' critic agrees the ... Has Fallen series is a welcome return to over the top bravado.

London Has Fallen is rated R for language and violence, for good reason. It includes frequent profanity and the impact of every death is shown. That's a lot of impacts. This is consistent with the tone of Olympus Has Fallen, in which director Antoine Fuqua brought an edge back to the genre that had been missing since the PG-13 rating was invented. Teenagers see more blood and gore than this on TV shows like The Walking Dead or Game of Thrones but it's rare in movies. It is more comparable to the harder edged films of the '80s than those of the last few decades.

The filmmakers made this movie for action movie fans. They didn't tone it down to get rom-com audiences in. They know their audience and even catered to an elite subset of it: the fans who crave action as bloody and aggressive as possible.

Any action hero makes light of his or her crisis. Butler seems to know that Mike has inherited the second-hand quips. They're not as clever as Willis's in Die Hard, so Butler is all attitude. He delivers lines about being thirsty with gusto, and it's a fair point. Fighting bad guys is exhausting; you have to hydrate. Ben even tells Mike that an obvious pun is not funny, so they are in on the joke. Even so, the music and tone play such scenes as heroic and earnest which goes back to the bravado. As long as the world around him acts tough and macho, Mike can say all the ridiculous things he wants.

Action Fans Will Love It

London Has Fallen is more of the same in the best possible way. It embraces the mean, nasty tone of Olympus Has Fallen, which three years later is still a treat for die hard, and Die Hard, action fans.