Batman v Superman: Dawn of Justice is both the sequel to 2013's Superman reboot Man of Steel, and the origin story of the future Justice League movies uniting all the DC Comics superheroes. They will join forces eventually, as they do in comic books, but first Batman has a beef with Superman.

Can't We All Just Get Along?

Batman and Superman are both good guys. What would make two heroes fight? In this complex story, Bruce Wayne (Ben Affleck), known to fans as Batman, believes Superman (Henry Cavill) will eventually turn his power against the people of Metropolis, Bruce's home of Gotham City, and Earth at large. Wallace Keefe (Scoot McNairy), a Wayne employee, already protests Superman because Wallace lost his legs when a building Superman knocked over crushed him. When Senator Finch (Holly Hunter)'s government hearings on Superman fail, Bruce devises a way to fight Superman himself. 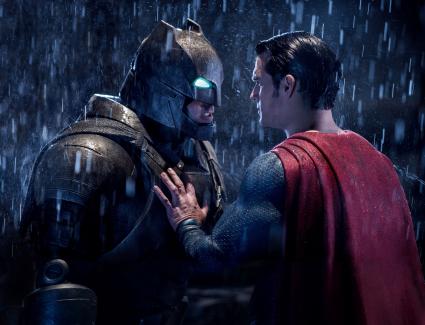 Superman considers cooperating with Finch. As ace reporter Clark Kent, he takes it upon himself to scold Gotham City for supporting Batman but speaking out against Superman. Rescuing Lois Lane (Amy Adams) from an ambush on a location interview only earns him more flack from Finch and Bruce. Lois herself suspects the ambush was a setup so investigates who is really behind it.

Lex Luthor (Jesse Eisenberg) has uncovered some Kryptonite, and he tries to get Finch to support using it against Superman. He's got a backup plot too, which he bribes a corrupt government official to assist. Lex also hosts a party attended by both Clark and Bruce, and a mystery woman (Gal Gadot), who is Wonder Woman. The film reveals how she ends up between Batman and Superman.

These are the people who really give Batman and Superman their strength.

As the title suggests, Batman V Superman: Dawn of Justice is several movies in one, but even more so than one might suspect. It's not just a Batman and a Superman movie put together. It's not just their movie with a Wonder Woman movie too. It's not just superheroes. It's also an investigative journalism movie, an industrial terrorist thriller, and a political movie, and they all work.

It is understandable if that combination is a bit too schizophrenic for some audiences. It was for some critics. There are plenty of singular, standalone superhero movies to satisfy those needs, but what a unique, ambitious combination for Batman V Superman to pull off. Director Zack Snyder and screenwriters Chris Terrio and David S. Goyer trust that there is an audience craving this sort of sophistication. An audience today consumes so much different media, often simultaneously between phones, computers, film, and television, they are ready to absorb and process multiple elements. Richard Roeper himself, of Ebert and Roeper fame, agreed the potential for greatness only waned for practical necessities. 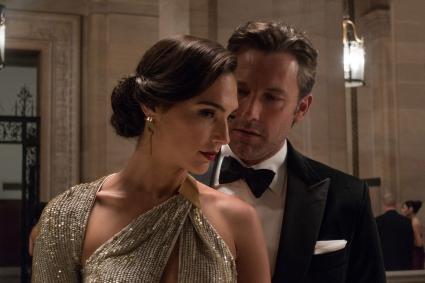 An experiment like this does require patience. The movie has a lot of introductions to make and a lot of investigations to explore: Lex's plan, Senator Finch's inquiry, Bruce's agenda, Clark's defense of Superman, Wallace's tragedy and even Lois's investigation. To give equal weight to all takes the first hour of the movie. The film tries to shoehorn a fight scene in there but it's really not relevant until all the dominoes are in place for the main event.

Snyder is creating an old-fashioned Hollywood epic with modern mythological characters. Back in the day, movies had so much story they needed an intermission just to get through it all! Two and a half hours of superheroes covers a lot and forces the characters to do more than just fight. Even viewers who aren't fans of these characters ought to be curious of the outcome when they all meet, let alone battle each other. Everyone has heard the names Batman, Superman and Wonder Woman even if they don't read comic books or watch superhero movies. Batman V Superman satisfies both basic and deep curiosity. It would be like putting Santa Claus against the Easter Bunny. Even if you've outgrown the holidays, you would want to see who wins.

As a Batman movie, Batman V Superman really captures what a lonely guy Bruce Wayne is. He's got Alfred (Jeremy Irons) whose compassion Bruce pretty much neglects, only to be alone with his own obsession. The film does show a faceless female body in bed next to him once, so Bruce probably has company regularly, but there's no love interest for him in this tale. He's too busy fighting Clark/Superman and dealing with all the other characters who want a piece of him.

Batman V Superman has to introduce the greatest rivalry in Superman's history. Eisenberg plays Lex Luthor as completely unhinged, even aggravating himself over a simple speech at his party. Lex is dangerously smart and devious. He wants to use the threat of a Kryponite bullet to police Superman, and when he unlocks Kryptonian power it only gives him more evil ideas. This Lex Luthor is a threat to the real world. He's a sociopath with the resources to exact great harm, so he must be stopped. Eisenberg's performance did not work for many other critics, however. 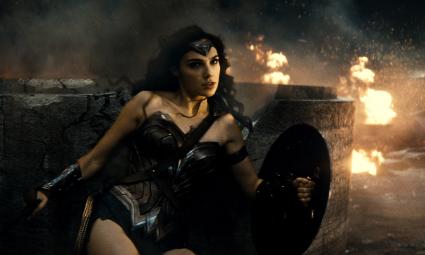 When Wonder Woman finally reveals herself to Batman and Superman, it is cathartic. Bruce and Clark were a little behind. They hadn't seen the Wonder Woman posters in movie theaters and didn't know she'd already filmed her own movie due out next year. Still, Gadot was mysterious about whether she'd be a thorn for Bruce or Clark, and she arrives to the battle with the best theme music in the movie. There's a hint of rodeo energy and definitely a "yee-haw" spirit.

For sharing their movie with some pretty major new characters, the returning Man of Steel cast gives up no ground. Cavill plays Superman as even more haunted by danger that seems magnetically attracted to him. Affleck is on Cavill's turf, in a good way. Batman can play in this sandbox but Superman's always going to remind him who's got the biggest toys. 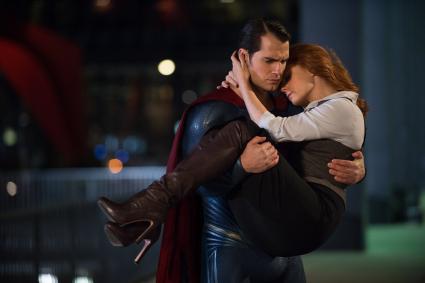 Amy Adams is focused on Lois Lane's dilemma. She's in love with a man whose greatness and power may make it impossible for them to be together. On the job Lois remains a crack reporter, able to face top brass without backing down. Even Perry White (Laurence Fishburne) gets a couple of strong speeches about the needs of modern day media. Or maybe that's just an excuse to yell at Clark for missing his deadline. Either way, it lets the Daily Planet, a key part of Superman's world, remain vital in a story that wants to pull away from all sides.

It is worth seeing Batman V Superman in IMAX because several sequences expand to fill the full screen. When it does, the difference is dramatic. In some sense, it is unfortunate the film opens with beautiful, clear IMAX scenes because when it cuts to the traditional movie footage it looks a tad blurry and dim.

Most of the IMAX footage is reserved for the Batman vs. Superman fight everyone came to see, and rightfully so. That sequence delivers, while the opening sequence and scattered IMAX bits throughout focus more on the quiet, artistic moments. It is always welcome when the screen itself overtakes the audience.

The intensity of the action is on par with Man of Steel, so any kid who wasn't scared or negatively affected by seeing that in 2013 is now three years older, anyway. New viewers catching up should probably respect the PG-13 rating. Batman action is as epic as Superman's because the Batmobile tears through buildings, boats and trucks. When the playing field is leveled, thanks to innovative Bat-gadgets, Superman acquits himself nicely to more human hand-to-hand combat.

Batman V Superman: Dawn of Justice may not be for everyone because it is such a different take on superhero movies. Those welcoming a different approach will be rewarded with a kaleidoscope of tones with no shortage of action. And Wonder Woman is awesome.